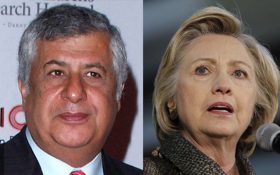 Hillary and Bill Clinton’s controversial charity, The Clinton Foundation, has been criticized for years as representing a clear conflict of interest for the political power couple .

The foundation’s harshest critics say it is a shadowy organization designed to enrich the Clintons, no matter where the money comes from.

Now, a revealing expose has uncovered that the foundation has accepted a small fortune from a man with alleged ties to a notorious terror group.

And it lends serious weight to the rumors that Hillary Clinton is compromised by foreign influence.

The Los Angeles Times has discovered that billionaire Gilbert Chagoury — a close family friend of the Clintons who has written a million dollar check to their foundation — was denied entry to the United States in 2015 for his connections to the Islamic terror organization Hezbollah.

In other words, the Clinton Foundation contains at least one donor with such troubling connections that even our deeply flawed Homeland Security system flagged him and kept him out.

Let that sink in for a bit — even the Obama administration says one of the Clinton Foundation’s patrons is too dangerous to be allowed through our borders.

Liberals are speechless over THIS shocking video

Republican candidate Donald Trump in the past has pointed out that the Clinton Foundation’s continued existence — and dependence on foreign donors — would be unacceptable in a Hillary Clinton presidency, and it could compromise the integrity of our country’s highest office.

Chagoury is a prime example. The billionaire businessman has a long history of alleged underhanded dealings with dictators, terror organizations, and corrupt officials around the globe, according to The Los Angeles Times report.

He also has a long history with the Clinton family and their inner circle.

Chagoury has attended dinners at the White House while Bill was president, written huge donation checks to their foundation of at least one million dollars, and has even been invited to the weddings of top Clinton aides.

“By the time Hillary Clinton became secretary of State, the relationship was strong enough for Bill Clinton’s closest aide to push for Chagoury to get access to top diplomats, and the agency began exploring a deal, still under consideration, to build a consulate on Chagoury family land in Lagos, Nigeria,” The Times report says. “But even as those talks were underway, bureaucrats in other arms of the State Department were examining accusations that Chagoury had unsavory affiliations, stemming from his activities and friendships in Lebanon. After a review, Chagoury was refused a visa to enter the U.S. last year.”

It has the Trump campaign sounding the alarm.

“The fact a major Clinton Foundation donor was denied entry into the U.S. over ties to the terrorist group Hezbollah is deeply troubling, especially when this individual had access to top aides at Hillary Clinton’s State Department,” Jason Miller, Senior Communications Advisor at the Trump campaign, wrote in a press release yesterday.

“These revelations are yet another example of why the Clinton Foundation must be shut down and Hillary Clinton must demand the State Department immediately release her official schedules in full before the election. Voters deserve to know just how badly compromised a Hillary Clinton presidency would be.”

What are your thoughts on the Clinton Foundation? Comment below.