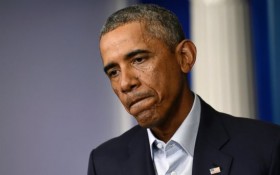 While President Barack Obama crisscrossed the US gathering political support to protect his controversial Iranian nuclear deal, he may have known that the Iranian military was launching massive cyberattacks against America.

And even after Obama helped quash Congressional and public opposition to the deal, the attacks have only worsened.

Multiple news sources, including the Wall Street Journal and Fox News, are reporting that the Islamic Revolutionary Guard Corps (IRGC) has for years routinely conducted cyberattacks against the United States, including the White House servers. The US intelligence community has had full knowledge of these attacks, but the Obama administration still chose to negotiate with Iran and staunchly defend the controversial nuclear deal.

Perhaps emboldened by the lack of response, there are now reports of a massive uptick in these IRGC cyberattacks in recent weeks, many centered around the arrest of Iranian-American businessman Siamack Namazi last month.

According to intelligence sources, the IRGC has been trained recently by Russian intelligence services to conduct such attacks, which are aimed at getting sensitive personnel data.

There are more signs that the Islamic Republic’s attitude toward the United States is as negative as ever.

On Wednesday, thousands demonstrated in front of the old U.S. Embassy to celebrate the anniversary of students seizing 52 Americans hostage there in 1979.

Meanwhile, four Iranian-Americans are known to be held by Iran: Iranian-American journalist Jason Rezaian of The Washington Post; former U.S. Marine Amir Hekmati of Flint, Michigan; pastor Saeed Abedini of Boise, Idaho; and Siamak Namazi, a businessman and the son of a politician from the shah’s era.

A new billboard in Tehran appropriates the famous Associated Press photo of the World War II flag-raising at Iwo Jima with blood-covered U.S. soldiers standing on a pile of corpses.

Even facsimiles of American culture are targeted, as demonstrators Wednesday carried signs that said no to U.S. fast-food chains like McDonald’s or Starbucks setting up franchises in the country.

During the demonstrations, state prosecutor Ebrahim Raeisi announced that the intelligence department of the Revolutionary Guard had detained a number of writers and spies “hired by Americans.” He did not elaborate. In recent weeks, artists and journalists in Iran have been arrested or given harsh sentences in a series of trials.

“Under no circumstances will we allow penetration of Americans in economic, social and cultural areas,” Raeisi said, repeating a constant warning heard since the nuclear deal was signed.