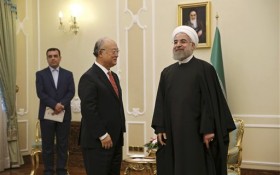 President Barack Obama last week stopped Congress from scuttling his Iranian nuclear deal, despite warnings from GOP leaders that Iran could not be trusted to honor the pact.

And it’s starting to look like they were right.

The head of the U.N. nuclear agency went to Tehran Saturday for high-level meetings as he tries to accelerate his probe of allegations surrounding Iran’s work on nuclear weapons — especially at a facility known as Parchin.

The agency has identified that site, southeast of Tehran, as where some of the suspected nuclear weapons work took place. And the Iranians appear to already be hiding something there.

Iran denies it has ever sought nuclear weapons, and insists Parchin is a conventional military site. But Tehran has refused to allow inspections of its military sites as part of the nuclear deal.

Amano got nothing more than a ceremonial tour of Parchin — but he told reporters in Vienna that he saw clear signs of what he’s calling “recent renovation work.”

He appeared to be referring to the building where the agency suspects that weapons experiments were conducted. The agency has frequently said that subsequent renovation work at and near the building could hamper the IAEA probe, and could be seen as a sign that the Iranians are trying to hide something or destroy evidence.

The diplomats, who are accredited to the IAEA, demanded anonymity because they are not authorized to discuss Amano’s agenda.

The trip is significant; it comes less than a month before an Oct. 15 deadline to gather information on allegations that Iran tried to build atomic weapons.

A final U.N. assessment is due in December, and that will feed into the larger July 14 nuclear deal between Iran and six world powers, helping to determine whether sanctions on Iran will be lifted.