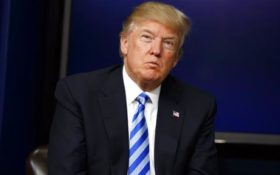 The more information comes out regarding the special investigation into Russian meddling in the 2016 presidential election, the worse things look for Special Counsel Robert Mueller and his team.

Even worse, two disgraced FBI agents that were recently fired from Mueller’s team have been caught conspiring to “protect the country” from Trump.

The two FBI officials also described him with insults like “idiot” and “loathsome human” in a series of text messages last year, according to copies of the messages released Tuesday.

In one Aug. 2016 exchange, a Donald Trump-related article was shared with the ominous warning: “And maybe you’re meant to stay where you are because you’re meant to protect the country from that menace.”

The other agent, Peter Strzok, replied: “Thanks. It’s absolutely true that we’re both very fortunate. And of course I’ll try and approach it that way. I just know it will be tough at times. I can protect our country at many levels, not sure if that helps.’”

Strzok, a veteran FBI counterintelligence agent, was removed over the summer from Mueller’s team following the discovery of text messages exchanged with Lisa Page, an FBI lawyer who was also detailed this year to the group of agents and prosecutors investigating Russian meddling in the 2016 election.

Hundreds of the messages, which surfaced in a Justice Department inspector general investigation of the FBI’s inquiry into Hillary Clinton’s use of a private email server, were being provided to congressional committees, which had requested copies, and were reviewed Tuesday night.

What they contain was ugly.

The existence of the text messages, disclosed in news reports earlier this month, provided a line of attack for Trump, who used the revelation to disparage FBI leadership as politically tainted. Republicans and the White House have seized on the exchange of texts between two officials who worked for Mueller as evidence the team is biased against Trump and its conclusions can’t be trusted.

Trump has called the investigation the greatest witch hunt in political history. The existence of these text messages reinforces that argument.

The issue is likely to be a focus of a congressional hearing Wednesday involving Deputy Attorney General Rod Rosenstein, who appointed Mueller as special counsel in May and oversees his team’s work.

The texts began in the summer of 2015, soon after the FBI launched its email server investigation, and continued over the next year and a half as the presidential race was in full swing and as Trump and Clinton were looking to defeat their primary challengers and head toward the general election.

The messages — 375 were released Tuesday evening — cover a broad range of political topics and include an exchange of news articles about the race, often alongside their own commentaries.

The harshest comments were reserved exclusively for Trump.

In a March 4, 2016, back-and-forth provided to Congress, Page refers to Trump as a “loathsome human” and Strzok responds, “Yet he may win.” After Strzok asks whether she thinks Trump would be a worse president than fellow Republican Ted Cruz, Page says, “Yes, I think so.”

The two then use words like “idiot” and “awful” to characterize Trump, with Strzok saying, “America will get what the voting public deserves.”

In another exchange, on Oct. 18, 2016, Strzok writes to Page and says: “I am riled up. Trump is an (expletive) idiot, is unable to provide a coherent answer. I CAN’T PULL AWAY. WHAT THE F**K HAPPENED TO OUR COUNTRY??!?!”

Weeks later, on election day, as it seemed to become clearer that Trump could defeat Clinton, he says, “OMG THIS IS F*****G TERRIFYING: A victory by Mr. Trump remains possible…”

So much for an unbiased investigation.