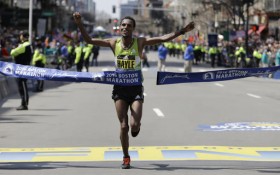 Ethiopians swept the Kenyans off the podium at the Boston Marathon on Monday, winning both the men’s and women’s races for the first time in history and taking five of the six spots on the victory stand.

Lemi Berhanu Hayle won the men’s race in 2 hours, 12 minutes, 45 seconds, pulling away from defending champion Lelisa Desisa as they crossed over the Massachusetts Turnpike heading into Kenmore Square. Hayle won by 47 seconds, with Yemane Adhane Tsegay an additional 30 seconds back to round out an all-Ethiopian top three.

Atsede Baysa won the women’s race, coming from 37 seconds behind with less than five miles to go. The two-time Chicago Marathon champion finished in 2:29:19 hours, 44 seconds ahead of fellow Ethiopian Tirfi Tsegaye.

Joyce Chepkirui was third in the women’s race, the lone Kenyan to medal in a race that had been dominated by her countrymen for decades. The results come as the World Anti-Doping Agency put Kenya on probation after more than 40 athletes tested positive for performance-enhancing drugs since the 2012 Olympics — nearly one a month.

Most of the top Americans, including 2014 winner Meb Keflezighi, skipped the race after running in the U.S. Olympic trials in February. Other countries pick their teams for the Summer Games by committee, and the performances in Boston could help Desisa and Hayle earn a ticket to Rio de Janeiro.

On a clear and windless day, cool temperatures at the start warmed to 62 degrees by the time the winners reached the Back Bay. It was supposed to reach the mid-70s later in the afternoon — an added challenge for the rest of the 30,000-runner field that left Hopkinton in four waves Monday morning.

Fifty years after Bobbi Gibb sneaked onto the course and became the first woman to finish the race, more than 14,000 women left Hopkinton for the 26.2-mile trek to Boston’s Copley Square, where a commemorative logo greeted them at the finish. Gibb served as the grand marshal this year, riding down Boylston Street in a sports car before breaking a ceremonial finish-line tape.

Defending women’s champion Caroline Rotich was among the first to fall out, dropping away from the leaders at a water station about 5 miles in and walking to the side of the road. No reason for her withdrawal was immediately available.

Baysa, 29, also fell out of the lead but never stopped running.

She was out of the picture as the women’s leaders passed the 35-kilometer mark, but soon after they left Heartbreak Hill the TV cameras picked up a bobbing yellow figure running along the side of the road. As she gained, it was clear that Baysa had saved enough energy for the winning kick.

She caught Chepkiui on Beacon Street in Brookline with about 2.5 miles remaining, then sped past Tsegaye on the run toward Kenmore Square. The gap grew larger over the final mile and Baysa turned onto Boylston Street all alone.

Hayle, 21, earned his first major marathon victory. He has run four smaller marathons since 2014, winning three and finishing second in Dubai in January.

Marcel Hug of Switzerland won his second straight wheelchair race in a three-man sprint to the finish. Ten-time champion Ernst Van Dyk was second by 1 second and he held off third-place finisher Kurt Fearnley in a photo finish, winning by the width of a tire.

Tatyana McFadden, of Clarksville, Maryland, won the women’s wheelchair race for the fourth year in a row.