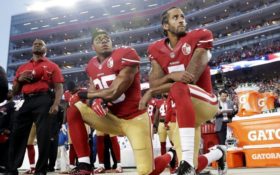 Is loving America a political statement? According to ESPN “First Take” co-host Max Kellerman it is — and he doesn’t want it played at NFL games.

On Thursday morning’s broadcast, Kellerman told his audience that he thought the NFL was injecting politics into football for playing The Star Spangled Banner before kickoff.

He argued the NFL put pressure on fans and athletes to stand for it, telling co-host Stephen A. Smith “You do not have to stand for the national anthem!”

Kaepernick’s “protest” was his refusal to stand for the national anthem as a backup for the San Francisco 49ers last season. Ali was arrested for protesting his enlistment into the Vietnam War.

Kellerman goes on: “They both were asked to do things that went against their conscience. In this country, in the United States of America, you don’t have to do that. We are free to make our own choices. And if our conscience is bothering us, we can follow that.”

True, one of the great things about being an American is the right to refuse honoring the men and women that died protecting this nation.

But if Kaepernick’s conscience tells him to disrespect the country he was born and raised in, he can always leave and make mediocre passes elsewhere.

Why does Kellerman feel the need to talk about politics at all?

He’s a sports broadcaster, not a political analyst. No one asked his opinion!

Sports channels are meant to be a way to relax, not a way to shove un-American propaganda down the throats of viewers.

ESPN should do its job, reporting on scores and teams, and stay out of the political arena.

Sports reporters should stick to the stats and allow Americans to form their own opinions when it comes to politics.

Why does the liberal media feel the need to condemn patriotism at sporting events?

Political correctness has no place in sports!