NBC: There’s too much patriotism at baseball games - The Horn News 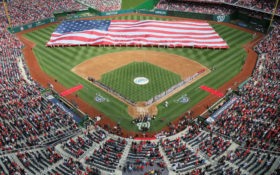 Most stadiums have flags waving from every direction: Flags for each team, usually arranged in order of the standings… flags for the home team… flags for the city… and a flag for the state.

And towering over them all, usually right out in centerfield, is Old Glory, flying high.

Given that baseball’s as American as it gets, who could possibly object to that?

Well, it turns out some people do – or at least, they oppose the increasingly larger and prouder displays of patriotism in ballparks as teams use pregame ceremonies to honor the brave men and women fighting for our nation.

Craig Calcaterra, the head baseball writer at NBC Sports, posted a tweet that at first seemed to mock those who object to patriotism, showing an image of a giant flag unfurled across Sun Trust Park in Atlanta, new home of the Braves.

"Will you keep politics out of sports, please. We like sports to be politics-free" pic.twitter.com/Mx3omxcNhu

Calcaterra says he didn’t mean it like that, and that he was making fun of people who share that sentiment, as he has done before. But then, as he engaged his readers, it became clear that SOMETHING was bothering him.

Turns out Calcaterra was complaining about what he called “militarism” at baseball games.

“Militarism is a form of politics practiced by both Ds and Rs,” he griped. “We should not promote militarism as if it were an ad campaign.”

Apparently, one flag and the national anthem are OK in Calcaterra’s book.

But honoring the military? That appears to be going too far.

“Maybe a flag, in and of itself isn’t always political,” he said in response to one reader. “A two-acre flag with a military flyover is saying something very specific, however.”

He added: “Wrapping oneself in the flag is a common means of achieving political ends.”

He claims the extra symbolism was never done before 9/11, and that the patriotic symbolism increased after the 2003 War in Iraq began.

But is that REALLY “militarism?”

Americans learned a very valuable lesson during the Vietnam War, not from a battle in a distant rice paddy but from the fight that took place here at home.

Leftists took to the streets not simply to engage in their constitutionally protected right to protest, but to harass… insult… spit on… and in some cases physically abuse the brave men and women who fought that war.

Since then, even most liberals have learned that we should all support the troops even if we object to war.

After all, the same soldiers, Marines, sailors and airmen who’ll suit for combat under orders from a Republican president will do so just as proudly for a Democratic commander-in-chief.

That’s not political. That’s not militarism. That’s just being an American.

It’s time for liberals to remember that, and quit complaining. Stand for the anthem, and PLAY BALL!