Enough is enough! European voters push back on migrant issue - The Horn News 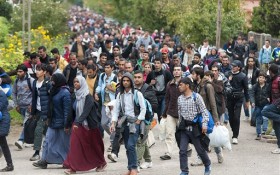 An anti-refugee party in Austria is poised to land a huge coup — a win at the polls that could see them take control of the Austrian capital.

More than any other topic, Austria’s stance toward refugees is determining Sunday’s race for Vienna’s city hall, pitting voters who welcome those fleeing into Europe against others who fear that a surge of refugees threatens their own well-being.

Only a fraction of the nearly 200,000 people who crossed into this country last month stayed, with most traveling on to Germany. Still, the Interior Ministry counted over 46,000 requests for refugee status by the end of August, compared to around 28,000 for all of 2014.

The asylum numbers and the nightly newscasts showing masses of people entering Austria have increased support for the Freedom Party, which believes that immigration not only threatens traditional Austrian values but also cuts into an already shrinking job market.

Freedom Party leader Heinz-Christian Strache has toned down his anti-immigrant rhetoric ahead of the Vienna vote in an attempt to win over critics. But other party members are not so subtle.

After an airline refused to fly an Afghan asylum-seeker out of the country because she put up a spirited fight, Freedom Party legislator Dagmar Belakowitsch-Jenewein suggested using military transport planes “where they can scream as loud as they want.”

Polls say the Socialists, who dominate the city’s two-party coalition, are still in front with more than a third of the vote, but the Freedom Party is gaining support and is close behind.

The Freedom Party already has made huge gains in several provincial elections this year, at the cost of the Socialists and the centrist People’s Party, but it has not won outright. Those establishment parties have governed on all levels in Austria with few exceptions since the end of World War II.

Runoff mayoral elections also are being held Sunday in 44 communities in Upper Austria province. But “Red Vienna” is a special prize.

The city has been governed for 60 years by the Socialists, alone or as the dominant coalition partner. Beyond the cachet of controlling the capital as mayor, that post is a major stepping stone toward Strache’s ultimate goal of becoming Austria’s chancellor.

His party has always drawn support from right-of-center voters, Euroskeptics, anti-Semites and xenophobes. More recently, with joblessness growing, it has threatened to usurp the Socialists as the nation’s blue-collar party.

This time, the Freedom Party is reaching out to all voters in hopes its anti-immigrant message will resonate with those fear the future.

“The majority of Austrians are faced with a real or imagined economic or social downturn,” says political analyst Andreas Filtzmaier. “This is makes it easy for the Freedom Party to say, ‘Things will only get worse because of mass immigration.'”