Elizabeth Warren's lies CALLED OUT by... who!? (surprising!) - The Horn News 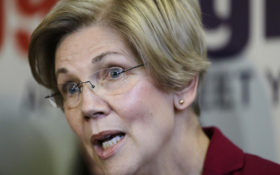 Massachusetts Sen. Elizabeth Warren used her false claims of Native American ancestry to get ahead in her career, critics claim.

Voters see Warren’s refusal to take a free DNA test to verify her claims as proof that she’s untrustworthy and unfit to lead, polls have shown. American Indian groups have begun to call out Warren as well, demanding she drop her unproven claims.

The firestorm around Warren has grown so fierce, even the liberal media has begun to call her out — and MSNBC’s Joy Reid says it will ultimately keep her from winning the White House.

“Every time somebody wants to talk about my family or attack or throw out some kind of racial slur, I’m going to use it as a chance to lift up more awareness of what’s happening in native communities across this country,” Warren said during a recent interview with MSNBC.

Warren was the subject of a new MSNBC show, “Headliners” on Sunday, which highlighted the toll the controversy if having on Warren’s political ambitions.

“It’s a question that will likely dog her, whether in her campaign for re-election to her Senate seat… or something even bigger,” Reid said in the special segment, implying that Warren’s goal to sit in the Oval Office won’t happen because of the controversy.

Reid is also the subject of a controversy that has seen her removed from at least one job.

We want to hear from YOU. Would you vote for Elizabeth Warren or Donald Trump for president?