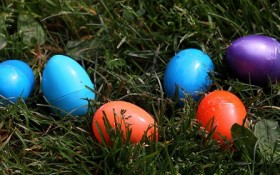 Police in Southern California are searching for a pair of thieves who stole Easter eggs meant for a toddler with Down syndrome from a family’s front yard.

Home surveillance video shows a man and woman passing by the home in Chula Vista on Easter Sunday and stopping to pick up several eggs.

A neighbor had spread the eggs on the lawn while Janet and Michael Ford went to church. The Fords were looking forward to having their 2-year-old son, Gabriel, hunt for them later in the day.

The video shows the thieves returning, accompanied by two kids, to pick up more eggs. Then the pair came back a third time and grabbed some holiday decorations.