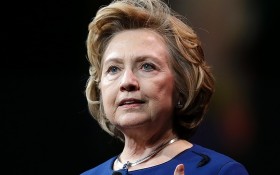 The e-mail scandal of former Secretary of State Hillary Clinton is causing a rift in the Democratic Party. Dems are furious that voters will link her untrustworthiness to the entire left. And they’re starting to speak out.

Democratic lawmakers said Clinton’s campaign has not adequately explained the complicated nature of the email review and panned some of her attempts to use humor to talk about the probe.

“I don’t think the campaign has handled it very well,” Florida Sen. Bill Nelson told The Associated Press on Thursday. “I think the advice to her of making a joke out of it — I think that was not good advice.”

Democratic Rep. John Yarmuth warned in an interview with WHAS-TV in Louisville that “this could upend her campaign.”

“I just never feel like I have a grasp of what the facts are,” Yarmuth said Wednesday. “Clearly she has handled it poorly from the first day.

While Clinton holds significant advantages in money among Democrats, polls released Thursday by Quinnipiac University in Florida, Ohio and Pennsylvania — three general election battleground states — found that only about one-third of respondents thought she was honest and trustworthy.

Former Maryland Gov. and presidential hopeful Martin O’Malley said Wednesday in Las Vegas that Clinton’s email practices had become a “huge distraction” from what Democrats should be talking about and said it showed the need for more televised debates.

“Until we do, our party’s label is going to be the latest news du jour about emails and email servers and what Secretary Clinton knew and when she knew it,” O’Malley said.

Republicans say they aren’t surprised that Democrats are growing nervous about continued focus on the situation.

“Clinton’s growing email scandal is a huge potential problem for Democrats because, at some point, this is going to become a drag on the whole ticket,” Republican National Committee Chairman Reince Priebus said on Friday.