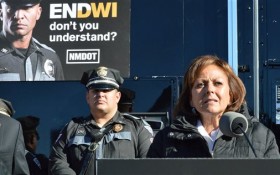 It must have been a heck of a Christmas party, because it could lead to serious consequences if it’s proven that this state governor overstepped her legal bounds.

New Mexico Gov. Susana Martinez is accused of ordering police dispatchers during a phone recording to cancel any police response to her rowdy party. She also demanded to know who lodged the criminal complaint but was repeatedly rebuffed.

Now, a recording from a police sergeant’s belt recorder suggests New Mexico Gov. Susana Martinez was inebriated the night officers responded to a noise complaint at a downtown hotel where she was hosting a holiday party.

Santa Fe police released the recording Tuesday, shedding more light on the Dec. 13 incident that has resulted in a flood of social media posts criticizing the Republican governor for her response to the situation.

A clerk at the Eldorado Hotel and Spa initially called police to report noise and rowdy behavior.

In the latest recording, the governor tells a hotel employee and the police sergeant that complaints about bottles being thrown from a balcony had been resolved.

Martinez’s speech is halting and lilting as she describes the situation in an upstairs hotel room after the ballroom gala.

“Five hours ago there was somebody that said, ‘Get out of the room, do not be doing what you are doing,'” Martinez can be heard saying. “There were bottles being thrown over. And we said get the hell out and stop.

Political opponents have accused the governor of bullying dispatchers and police while displaying an above-the-law attitude.

The incident also threatens to freeze Martinez’s rising influence within her party as chair of the Republican Governors Association, a fundraising arm of the GOP. She was appointed to the post last month.

The latest audio was captured by a recorder that Santa Fe officers wear on their belts. They do not wear video cameras.

After listening to Martinez, the police sergeant and a hotel security guard apparently step aside and discuss what to do next.

“I really don’t know what to do with the situation because I can tell she is a little … ,” the security guard says before pausing.

Political observers say the recordings reflect poorly on Martinez and her allies because of recent indications of corruption within local party ranks.

As the dispatch tapes first began to circulate last week, former Secretary of State Dianna Duran was being booked into a county jail to serve a month-long sentence for embezzling campaign funds to fuel a gambling addiction.

“That creates sort of a double-punch for the electorate,” said Lonna Atkeson, a political science professor at the University of New Mexico. “It looks really bad, the arrogance and the cronyism that’s going on there.”

Federal investigators have been looking into whether the New Mexico Taxation and Revenue Department may have conducted audits in retaliation against officials who ran afoul of the Martinez administration. There have been no charges or formal allegations of wrongdoing.