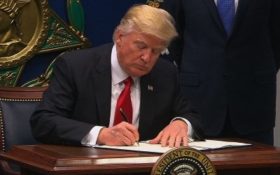 With just one week left until President Donald Trump hits the 100-day mark in his first term, and the media is preparing to assign his grade so far.

But unlike the mainstream media, The Horn News wants to know what everyday Americans think of Trump’s job as commander-in-chief so far.

If the mainstream media had it’s way, Trump’s report card would be an “F — Failure” and the president’s supporters would turn their back on him.

No matter how much I accomplish during the ridiculous standard of the first 100 days, & it has been a lot (including S.C.), media will kill!

But not all is bad. According to recent polling data, Trump’s popularity has soared above former President Barack Obama’s average.

For comparison, Obama’s popularity rarely exceeding the 40s during his two terms, and dipped as low as 38 percent approval in Sep. 2014.

Early in his term, The Horn News polled 25,000 voters regarding Trump’s report card.

As Trump approaches the 100-day mark, do you still agree with this rating?