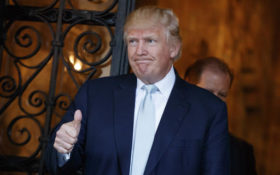 If the mainstream media had their way, President Donald Trump would be the most unpopular president in history.

You won’t hear it from the mainstream media. Because Trump has been under siege since the election.

Turn on just about any television news or open a major newspaper, and it’s a nonstop blitz of attacks against the president.

But Americans aren’t buying it. In fact, in recent weeks Trump’s popularity has soared — and his polling numbers are significantly higher than what Obama had on average.

According to Rasmussen Reports, Trump’s popularity among likely voters has reached 50%, a staggering eight point climb from just a few weeks ago. 30 percent report they “strongly approve” of Trump’s job as president.

For comparison, Obama’s popularity rarely exceeding the mid-to-high 40s during his two terms. In fact, in Sep. 2014, Obama’s approval ratings sunk as low as 38 percent, with only 20 percent saying they “strongly approve” of his job performance.

It’s not the story you’ll hear from CNN and the liberal news media.

The numbers don’t lie, though.

The truth is simple. Everyday Americans support Trump — and they aren’t buying the mainstream media’s spin.

The president himself is pleased by the news, and posted the following on Twitter —