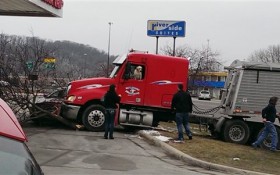 One dog apparently has learned a new trick: how to drive a semi-truck.

Customers at a Minnesota gas station saw a golden Labrador retriever appear to drive the semi across a road Friday.

Mankato police say the idling truck apparently was put into gear, then went through a parking lot, across the street and over a curb.

The Free Press of Mankato reports a passer-by discovered the dog sitting in the driver’s seat when he jumped into the truck to stop it.

David Stegora was at the store when he heard the truck smash into a tree and a parked car. He couldn’t see the driver, but saw the dog climb up near the driver’s side.

Police say the truck was taken off the road. The driver had left the unoccupied truck running in a nearby parking lot.