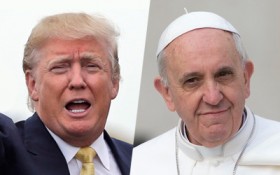 They might be living very different lives, but it looks like billionaire presidential hopeful Donald Trump and Catholic Pope Francis have one thing in common.

They’re both equally admired by Americans.

In Gallup’s annual poll of the individuals Americans admire most, Trump tied with the pontiff for second place. Even more impressive, Trump beat out some big-time heavyweights, including Microsoft founder Bill Gates and the Dalai Lama.

President Barack Obama topped the list of most admired men, which is common for American presidents, although his support took a hit from previous years.

“Trump’s surprisingly strong and often controversial presidential campaign has made him a prominent news figure this year and, thus, top-of-mind for many Americans,” said Gallup’s Jeffrey M. Jones.