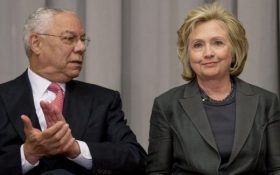 It’s an excuse one would expect to hear from a 4-year-old caught with their hand in the cookie jar.

Is it any surprise to hear such a juvenile attempt to shift blame out of the mouth of Democratic presidential candidate Hillary Clinton?

She’s now trying to blame retired chairman of the joint chiefs and former Secretary of State Colin Powell for her email fiasco.

No surprise there, right? After-all, history has proven that Clinton is willing to do just about anything to avoid accepting personal responsibility for wrongdoings.

Powell served his country for decades. He has unquestioned integrity — but that didn’t stop Clinton from telling FBI investigators that Powell was to blame for her homebrew email server scandal.

According to The New York Times, “Pressed by the FBI about her email practices at the State Department, Hillary Clinton told investigators that former Secretary of State Colin L. Powell had advised her to use a personal email account.”

They quoted a person with insider knowledge of the contents of the FBI notes taken at the interrogation of Clinton during the email investigation. The FBI gave those notes over to lawmakers earlier this week.

Clinton’s campaign remains worried the notes will eventually made public — and with good reason.

This report proves Clinton is willing to drag anyone’s name into the mud to avoid trouble.

Clinton insiders have to constantly be wondering when they’ll fall on her sword.