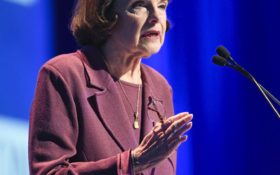 After her last election, Sen. Dianne Feinstein, D-Calif., was sworn in as the oldest person in Congress.

Feinstein goes up for re-election in 2024. She has yet to announce her retirement… but some other Democrats are already trying to boot her out.

And it’s not just rumors anymore.

Rep. Katie Porter, D-Calif., said Tuesday she will officially seek to oust Feinstein and take over her seat. “Especially in times like these, California needs a warrior in Washington,” Porter said in a video posted on Twitter. “That’s exactly why I’m announcing my candidacy for the United States Senate in 2024.”

“To win these fights, it’s time for new leadership in the U.S. Senate,” she said.

Porter will be running statewide in the nation’s largest state. She’ll likely face some formidable opponents during the Democratic primary — and has a significant amount of baggage of her own.

“Everyone is of course welcome to throw their hat in the ring, and I will make an announcement concerning my plans for 2024 at the appropriate time,” Feinstein said in a statement Tuesday. She added that she is currently “focused on ensuring California has all the resources it needs” to deal with deadly storms hitting the state.

Feinstein won her sixth election in 2018 and has been a force for Democrats, serving for a time as chair of the intelligence and judiciary committees.

But she also has seen pushback from Democrats who view her as too weak at a time when politics is more polarized and her state is increasingly liberal.

Feinstein, in her advanced age, has faced questions about her fitness for office. In 2020, she faced her constituents’ rage for being too friendly with Republicans during confirmation hearings for Supreme Court Justice Amy Coney Barrett. That included an embrace of the Republican Chairman, Sen. Lindsey Graham of South Carolina, at the conclusion of the hearings and kind words for what she called a job well done.

Feinstein has defended her performance and said in 2021 that she planned to serve her full term, even as there was open speculation and discussion about the future of the seat. Gov. Gavin Newson said in 2021 that he would appoint a Black woman to replace Feinstein, who’s white, if she were to retire early.

California needs a warrior in the Senate—to stand up to special interests, fight the dangerous imbalance in our economy, and hold so-called leaders like Mitch McConnell accountable for rigging our democracy.

Today, I'm proud to announce my candidacy for the U.S. Senate in 2024. pic.twitter.com/X1CSE8T12B

Porter, 49, was a consumer protection attorney before her election to the House

She went viral during the recent votes in the U.S. House over the election of a new speaker. As Republicans argued, Porter was seen sitting in the chamber, disinterestedly, reading a book called “The Subtle Art of Not Giving a [F**k].”

But Porter has also suffered some very serious scandals.

Despite the housing crises in her district, Porter lives in luxury housing largely paid for by the University of California, Irvine… and by proxy, taxpayers. Since joining Congress four years ago, Porter has been taking unpaid leave from her job at the public university.

More recently, Porter has faced criticism for allegedly mistreating her staff. After some anonymous leaks, Porter stands accused of telling racist jokes on Capitol Hill, firing a staffer over text message, covering up sexual harassment in the workplace, and more.

Rep. Katie Porter reading “The Subtle Art of Not Giving a F*ck”

Which, according to former staff, is also her attitude towards sexual harassment complaints in her office pic.twitter.com/ocpxTZzCIR