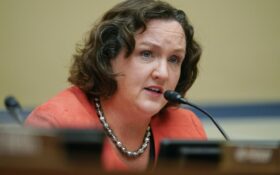 The mainstream media has ignored a growing scandal in one of the top U.S. Democratic Party leader’s office.

Rep. Katie Porter, D-Calif., reportedly has her eyes on longtime Democratic Sen. Dianne Feinstein’s seat in the U.S. Senate, and is eyeing a run in 2024.

Porter grabbed glowing media headlines when she not-so-subtly pulled out the book “The Subtle Art of Not Giving a F**k” during the drama surrounding the election of House Speaker Kevin McCarthy.

But the media has all but turned a blind eye to the numerous scandals inside Porter’s office.

According to initial reports, Porter blamed and fired a staffer for giving her COVID-19… via text message. And it quickly got worse.

“Porter’s staffer, the office’s Wounded Warrior Fellow named Sasha Georgiades, told Porter that she forgot to follow Covid protocols because one of her friends had just been murdered,” The Spectator reported. “This apparently did not matter to the congresswoman.”

According to one anonymous staffer, Porter often uses rude or racist language and passes it off as jokes.

Another staffer complained that sexual harassment “is not taken seriously and is swept under the rug” in Porter’s office.

This is just the latest in a series of scandals surrounding Porter and her behavior.

Porter’s four-bedroom, three-bath residence was bought in a luxurious subdivision on the University of California Irvine was bought for a steal at $523,000 in 2011, a below-market price secured through a program the university uses to lure academics who couldn’t otherwise afford to live in the affluent area.

The only eligibility requirement was that she continue working for the school. Over the past four years, however, Porter has spent no time in the classroom. She took unpaid leave from the University’s $258,000-a-year teaching job to serve in the U.S. House.

She still lives in the subsidized housing at the public university, however.

Imagine the ghoulish media outrage if a top Republican congressman was living in a taxpayer-subsidized mansion in Kansas while eyeing a U.S. senate run, was known among Capitol Hill staffers to tell racist jokes, was sweeping sexual harassment under the rug, and had just fired a veteran via text message because they both happened to get sick at the same time?

The scandal would make headlines around the globe. But, because it’s a progressive congresswoman, it seems there’s no media attention at all.

Rules for thee, but not for me.