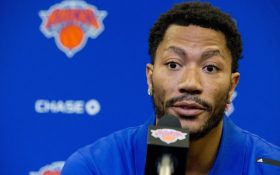 The death of a Los Angeles police detective, who was in the midst of investigating the rape accusations against NBA star Derrick Rose, was found shot at a suburban home was being investigated as a suicide, authorities said Wednesday.

There were no signs of foul play in the death of Nadine Hernandez, police in the Los Angeles County city of Whittier said.

The 44-year-old Whittier resident was found Tuesday with a gunshot wound to the chest. She died at a hospital.

A handgun was recovered at the scene, police said in a statement.

Hernandez was a detective in the Robbery-Homicide Division Special Assault Section, according to LAPD Officer Liliana Preciado. She was frequently assigned to high-profile cases like Rose’s, Preciado said.

Hernandez last month wrote a letter cited in federal court in Los Angeles confirming that the department was looking into sexual abuse allegations in connection with a rape complaint against Rose. Rose is being sued in the matter and denies any wrongdoing.