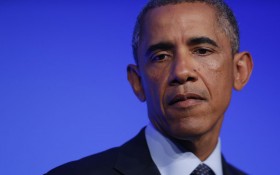 It’s rare when all Americans can agree on one thing, but it makes for a powerful force when our political parties act in unison. Now, it’s being reported that the two normally bitter political rivals are coming together against a common foe — President Barack Obama.

Specifically, they want to put a stop to what they’re calling the Obama administration’s illegal foreign policy moves.

In an unusual alliance, a House Democrat and Republican have teamed up to take on the Obama administration and urge the president to stop trying to overthrow Syrian President Bashar Assad. Instead, they want to focus all the United States efforts on simply destroying Islamic State militants.

Reps. Tulsi Gabbard, D-Hawaii, and Austin Scott, R-Ga., introduced legislation on Friday to end what they called an “illegal war” to overthrow Assad, the leader of Syria accused of killing tens of thousands of Syrian citizens in a more than four-year-old civil war entangled in a battle against IS extremists, also known as ISIS.

“The U.S. is waging two wars in Syria,” Gabbard said. “The first is the war against ISIS and other Islamic extremists, which Congress authorized after the terrorist attack on 9/11. The second war is the illegal war to overthrow the Syrian government of Assad.”

Scott said, “Working to remove Assad at this stage is counter-productive to what I believe our primary mission should be.”

Publicly, the United States has focused its efforts on fighting IS and urging Assad to step down. But beyond thousands of U.S. airstrikes targeting IS in the region, the CIA began a covert operation in 2013 to arm, fund and train a moderate opposition to Assad. The secret CIA program is the only step the U.S. is taking on Assad militarily.

In the Philippines on Thursday for the Asia Pacific Economic Cooperation summit, President Barack Obama reiterated America’s demand that Assad must go. “The bottom line is: I do not foresee a situation in which we can end the civil war in Syria while Assad remains in power,” Obama said.

Since 2013, the CIA has trained an estimated 10,000 fighters, although the number still fighting with so-called moderate forces is unclear. CIA-backed rebels in Syria, who had begun to put serious pressure on Assad’s forces, are now under Russian bombardment with little prospect of rescue by their American patrons, U.S. officials say.

For years, the CIA effort had foundered — so much so that over the summer, some in Congress proposed cutting its budget. Some CIA-supported rebels had been captured; others had defected to extremist groups.

Gabbard complained that Congress has never authorized the CIA effort, though covert programs do not require congressional approval, and the program has been briefed to the intelligence committees as required by law, according to congressional aides who are not authorized to be quoted discussing the matter.

Gabbard contends that the effort to overthrow Assad is counter-productive because it is helping IS topple the Syrian leader and take control of all of Syria. If IS were able to seize the Syrian military’s weaponry, infrastructure and hardware, the group would become even more dangerous than it is now and exacerbate the refugee crisis.