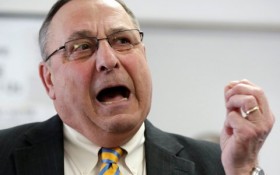 Maine’s Republican Governor Paul LePage received a stay from impeachment charges that were expected to be introduced against him in Augusta today.

But the delay is not expected to last long.

Reps. Jeff Evangelos and Ben Chipman, who are co-sponsoring the longshot effort to impeach LePage, told the Bangor Daily News that they were holding off on the impeachment order so it could be introduced at the same time as a possible censure resolution from Democratic leadership.

That still means the impeachment order, which is being spearheaded by a handful of Maine Democrats and independents, will still likely hit the House floor this week.

“I don’t think it’s going to be [Wednesday], but we’re definitely going forward with it,” Chipman told the newspaper. “Everything’s a go as far as we’re concerned.”

The impeachment effort was triggered by LePage’s role in the the decision by the Good Will-Hinckley School to fire Democratic House Speaker Mark Eves as its president. LePage allegedly threatened to withdraw state funding from the school.

But the orders will include other alleged abuses by the governor.