Democrats conspiring to shut down government - The Horn News 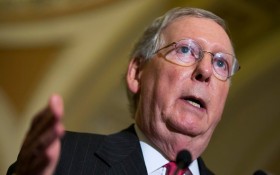 America may be just one week away from a devastating federal government shutdown. And while it is well known that a bloc of the Republican party doesn’t support a funding bill that would include money for Planned Parenthood, the Democrats on the other side of the aisle have traditionally met moderate Republicans half-way to ensure the government continues to function.

Now the Democrats may be seizing the opportunity to sabotage budget compromise plans to keep the government running — all with an eye toward blaming an eventual shutdown on the GOP.

Both public and internal GOP polling shows that voters do not favor shutting down the government, a fact the Democrats seem to be banking on.

The Senate is preparing to vote on legislation that would keep the government open beyond next Wednesday’s deadline at a price Democrats are certain to reject — stripping taxpayer money from Planned Parenthood.

The stopgap spending bill, which would keep the government operating through Dec. 11, is widely expected to fail today. The next steps aren’t set in stone, although Senate Majority Leader Mitch McConnell, R-Ky., is trying to avoid a government shutdown. That suggests he would soon press ahead with a “clean” stopgap measure that keeps Planned Parenthood funding intact.

But the Democrats may be more interested in making the GOP look bad than compromise on a spending bill, according to multiple reports.

Influential California Democratic Rep. Xavier Becerra said he was considering voting against the clean measure that would keep the government open, adding that he wasn’t particularly interesting in keeping Republicans from “killing themselves.”

Rep. Steny Hoyer, the No. 2 House Democrat, was asked about helping the GOP solve the issue and said,”It’s not our responsibility,” to help the Republicans figure it out.

With a 2016 presidential race looming, political analysts say Democrats may be secretly hoping for — and nudging along — a shutdown that voters are likely to blame on the GOP.

Internal GOP divisions over which tactics to use to take on Planned Parenthood have House Republican leaders tied in knots, and they’ve been unable to take on their traditional role of initiating spending legislation.