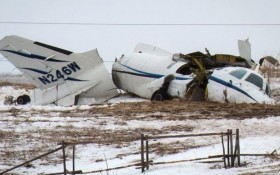 Among those killed was former federal cabinet minister and political commentator Jean Lapierre.

Other members of his family were also believed to be among the victims. They were traveling to the Iles-de-la-Madeleine after the recent death of Lapierre’s father.

Canadian Prime Minister Justin Trudeau tweeted that he was “shaken by the sudden death” of Lapierre and called it a great loss to the political world.

The plane was a Mitsubishi turboprop and is believed to have belonged to a private company. The plane had taken off from the St-Hubert regional airport south of Montreal earlier in the morning.

“The crash took place in a field on approach to the airport,” said Quebec provincial police Sgt. Daniel Thibodeau, who described the weather conditions as “not ideal” for flying.

The plane crashed close to the airport in the Iles-de-la-Madeleine just off eastern Quebec. The cause is not immediately known.

The Transportation Safety Board of Canada is deploying a team of investigators.

Environment Canada had issued an alert for strong winds in the region.