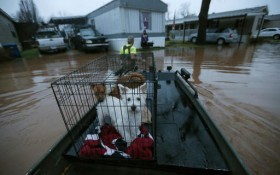 A second round of rain early Thursday was hitting an already inundated north Louisiana, where flooding in some places was up to the rooftops and in others submerged cars, stranded families and forced evacuations. 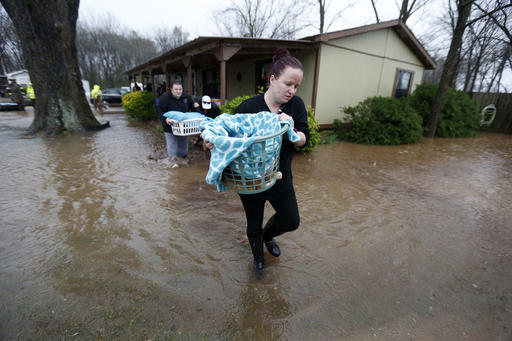 Camie Kelly walks through floodwaters as she carries her family cat from the the Pecan Valley Estates trailer park as residents evacuate due to rising water in Bossier City, La., Wednesday, March 9, 2016. (AP Photo/Gerald Herbert)

In Bienville Parish, authorities said a man died and a woman was being treated for injuries after their car was swept off a flooded Louisiana road Wednesday and into a creek. In rural southeastern Oklahoma, a 30-year-old man drowned Tuesday night after trying to drive his SUV across a low-crossing bridge covered by floodwater. In Texas, a 22-year-old man drowned Monday night after his canoe capsized in Dickinson Bayou, southeast of Houston near Galveston Bay.

The forecast is for the rain to end by Friday afternoon. Flash flood watches remained in effect for areas from Port O’Connor, Texas, to near Springfield, Illinois.

Air Force Tech Sgt. Drew Scott and another military friend brought in a boat Wednesday to help evacuate up to 200 mobile homes in the Pecan Valley Estates community in Bossier Parish. Scott said he had gone in his truck earlier Wednesday to pick up his in-laws but couldn’t get into the park.

“Water, coming up from the Flat River, was waist deep or higher and going into the houses. There were lots of cars flooded out. At the deepest point, I’d say, it was up to my chest and I’m 6 feet,” he said.

Scott said he and his friend assisted the sheriff’s office, firefighters and others in getting those who were stranded out of harm’s way.

“When things like this happen, people start helping others and that helps restore faith in the country and humanity,” he said. “That’s the way I was raised and the way I raise my family. I would hope that if the shoe was on the other foot and I needed help that someone would do the same for me.” 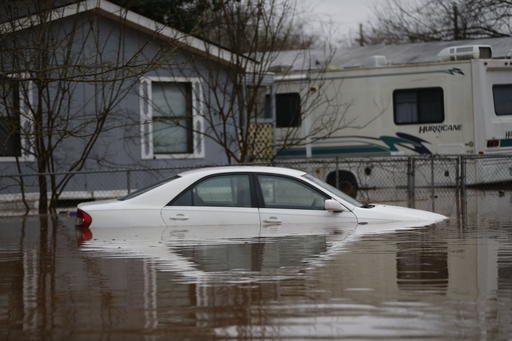 Sharon Anderson, her three children and four grandchildren were rescued from her south Bossier Parish mobile home after rising water threatened to trap them. Several other families already had been trapped, and the water was still rising, she said.

“This morning it was touching the bottom of the houses,” she said. “Now the steps on my back porch are under water, and if you walk down the driveway, it’s over the knee.”

Anderson said they were pretty much surrounded by the water. The road into the area is flooded and another outlet that has a bridge is closed because of water.

“We’re literally trapped,” Anderson said. “You have to get a boat to get to our doors in this neighborhood.”

Several Louisiana parishes have declared a state of emergency, and the National Guard was sent in to help.

Louisiana State Police closed a section of Interstate 20 near Gibsland after both the eastbound and westbound lanes were covered with a foot of water, making the road impassible.

Meteorologist Matthew Duplantis of the National Weather Service in Shreveport said Wednesday rain brought an additional 2 to 4 inches to the area.

Northwestern State University’s campuses in Natchitoches and Shreveport will be closed Thursday due to weather conditions, as are Bossier Parish public schools.

Over southeast Louisiana, including the New Orleans metro area, forecasters say the slow-moving low pressure system was expected to bring a few rounds of heavy rainfall beginning Thursday morning and continue through early Saturday. Rainfall totals could reach 10 inches in some areas and could result in someflooding.