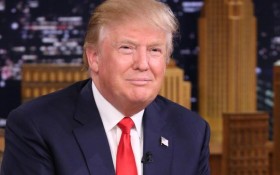 Is presidential candidate Donald Trump backing down, or is this another crafty move by the master of the deal?

It depends on who you ask. But, with his general-election appeal in question, Donald Trump’s senior team is promising anxious Republicans that voters will see “a real different guy” soon after the GOP front-runner claims his party’s presidential nomination.

“When he’s out on the stage, when he’s talking about the kinds of things he’s talking about on the stump, he’s projecting an image that’s for that purpose,” Paul Manafort, who is leading Trump’s primary election strategy, told Republican National Committee members in a private briefing late Thursday. The Associated Press obtained a recording of the discussion.

“He gets it,” Manafort said of Trump’s need to moderate his brash personality. “The part that he’s been playing is evolving into the part that now you’ve been expecting, but he wasn’t ready for, because he had first to complete the first phase. The negatives will come down. The image is going to change.”

The message is part of the campaign’s intensifying effort to convince party leaders that Trump will help deliver big electoral gains this fall, despite his contentious ways. Yet it also opens him up to questions about his authenticity.

“I’m actually going to give Trump a little bit of credit here. He’s being candid. He’s telling us he’s lying to us,” Cruz told host Mark Levin. “You look at what his campaign manager says, is that this is just an act. This is just a show.”

The Republican National Committee gathered at a seaside resort in south Florida for its annual spring meeting. While candidates in both parties targeted primary contests in the Northeast, Hollywood’s Diplomat Resort & Spa turned into a palm-treed political battleground.

Senior advisers for Trump, Cruz and Ohio Gov. John Kasich courted RNC members in a series of private meetings on the resort’s grounds, sometimes sitting at adjacent tables in the marble-floored lobby. Trump’s tightening grasp of his party’s presidential nomination dominated much of the hallway discussion.

“He’s trying to moderate. He’s getting better,” said Ben Carson, a Trump ally who was part of the GOP’s front-runner’s RNC outreach team.

Despite his team’s aggressive message, Trump was telling voters he wasn’t quite ready to act presidential. “I just don’t know if I want to do it yet,” he said during a raucous rally in Harrisburg, Pennsylvania, that was frequently interrupted by protesters.

“At some point, I’m going to be so presidential that you people will be so bored,” he said, predicting that the size of his crowds would dwindle if he dialed back his rhetoric.

Trump’s team also signaled to RNC members that he was willing to dip into his personal fortune to fund his presidential bid, in addition to helping the national committee raise money, a promise that came as Trump prepared to launch his first big television advertising campaign in a month.

His campaign reserved about $2 million worth of air time in soon-to-vote Pennsylvania and Indiana, advertising tracker Kantar Media’s CMAG shows.

“He’s willing to spend what is necessary to finish this out. That’s a big statement from him,” Manafort said in the briefing.

Manafort also insisted that Trump is prepared to work closely with party leaders, despite the candidate’s near-daily public attacks on what he calls “a rigged” presidential nomination system.

“Is Donald Trump running against the Republican National Committee? The answer is he is not,” Manafort said.

Trump is increasingly optimistic about his chances in five states holding primary contests Tuesday: Rhode Island, Connecticut, Pennsylvania, Delaware and Maryland. He is now the only candidate who can possibly collect the 1,237-delegate majority needed to claim the GOP nomination before the party’s July convention.

Cruz and Kasich hope Trump will fall short so that they can have a chance to turn enough delegates to win the nomination at the convention.

What do you think of The Donald’s move to soften his demeanor? Share your comments below.