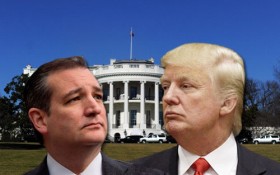 Could the Republican presidential race get any nastier? On Tuesday, Texas Sen. Ted Cruz blasted rival Donald Trump in a radio interview where he accused the Republican frontrunner of being a bully, inciting violence and using dirty tricks to intimidate voters and delegates, as Trump continued to rail against a nominating system he says is crooked and rigged.

In response, Trump urged his supporters to turn out next Tuesday in New York not only to support his bid, but to send a message to their party. “You’ve got to show the Republican Party that they can’t get away with this stuff any longer,” he said.

Using some of the harshest rhetoric of the campaign to date, Cruz said his billionaire rival is a bad businessman who has been surrounded by sycophants his entire career.

“Donald’s whole pitch is he’s a great businessman,” Cruz said in the wide-ranging interview on the Glenn Beck radio show, adding that given how he runs his campaign, “it appears he can’t run a lemonade stand.”

The comments came as both campaigns work tirelessly behind the scenes to secure delegates who will back them at the Republican Party convention this summer in Cleveland. So far, Trump has appeared badly outmaneuvered by a better-organized Cruz operation, prompting the billionaire businessman to rail against the Republican electoral system, claiming that the will of the voters is being denied.

“Our Republican system is absolutely rigged. It’s a phony deal,” said Trump at a rally in a packed airport hangar in Rome, New York, on Tuesday evening.

He pointed to Colorado, where he said the delegate-selection system was set up by “crooked politicians” to make sure an outsider like him could never win.

“These are dirty tricksters,” he said, placing the blame on the Republican National Committee. “They should be ashamed of themselves for allowing this kind of crap to happen,” he added, saying that both Republicans and Democrats have set up “phony rules and regulations” that makes it “impossible for a guy that wins to win.”

He went further a few hours later during a CNN town hall in New York City, suggesting the RNC was actively working to defeat him.

“The RNC doesn’t like this happening. They don’t like that I’m putting up my own money because it means they don’t have any control over me,” Trump said, arguing that the deck is “stacked against me by the establishment.”

On Monday, RNC Chairman Reince Priebus responded to Trump’s complaints, declaring that “the rules are the rules.”

Cruz, in the radio interview, unloaded on Trump over reports that his supporters were publishing the home addresses of delegates in Colorado and threatening to make public the hotel room numbers of delegates at the convention this summer.

“That is the tactic of union thugs,” Cruz said. “That is violence. It is oppressive. The idea that Donald is threatening delegates, we’re seeing that pattern over and over again.”

Cruz even compared Trump to the lead character from “The Godfather.”

Cruz also discounted the seriousness of the Trump candidacy, saying: “There was a real chance this was a lark, this was ‘let’s get some publicity, let’s have some fun.’ And I think he was surprised as anybody.”

Cruz joked that Trump is doing so poorly in securing delegates that if he were on his own reality show, “The Apprentice,” he would have to fire himself.

Cruz even got in a jab at New Jersey Gov. Chris Christie, who endorsed Trump after dropping out of the race.

“Chris Christie right now is trapped in his own private hell,” Cruz said. “When Chris was standing behind Donald holding his jacket, the look in his eyes. You could see the screaming.”

Meanwhile, Trump released a new radio ad, that referenced Cruz’s shot at “New York values” during a GOP debate, telling voters in next week’s primaries that “other candidates do not like us.”

Cruz conceded that Trump will do well in upcoming primaries, including in Trump’s home state of New York next Tuesday.

“He ought to win his home state convincingly,” Cruz said, setting expectations high for Trump. “If Donald isn’t substantially above 50 percent in New York, it will be a big loss for him.”

Cruz said he will fare better when the race shifts back west to Indiana, Nebraska, South Dakota and Montana, before finishing in California on June 7.

“If and when the people of California vote against Donald Trump, he’s going to scream that they’re stealing the election,” Cruz said. “Apparently when anyone votes against him it’s an act of theft.”