[Mugshot] Man kills flamingo at theme park… in front of his kids! - The Horn News 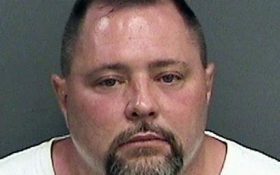 Veterinarians at Busch Gardens had to euthanize “Pinky” the dancing flamingo after a man grabbed her from an animal viewing area and threw her to the ground in front of his children.

According to a police report, 45-year-old Joseph Anthony Corrao of Orlando was visiting the theme park with his mother and his three teenagers on Tuesday when he reached into a pen in the Jambo Junction area, picked up a flamingo and set it down.

Police say his mother told him to leave the birds alone after he picked up another one. And that’s when he threw Pinky down so hard that its foot was nearly severed, the police report said.

Park security officers detained him until his arrest by Tampa police.

Busch Gardens said the bird suffered “traumatic” injuries and could not be saved.

“A very sad and hard day for us here,” said a park spokeswoman, Karen Varga-Sinka.

Judge John Conrad had strong words for Corrao in court on Wednesday.

“It actually borders on depraved,” the judge said. “Mr. Corrao, I don’t know if you have other issues. I don’t know who does that, I really don’t. I don’t relate to that on any level.”

Corrao served three years in prison in Florida after being convicted of aggravated assault on a person 65 years or older, felony DUI, and fleeing from a law enforcement officer.

The judge ordered him held in the Hillsborough County Jail on a $5,000 bond on a felony count of aggravated cruelty to animals. Jail records did not list a defense attorney.

Pinky was 19, a Chilean flamingo hatched at the park in 1996. The attraction has 20 flamingoes, a mix of Chilean and Caribbean, but Pinky’s moves made her a star.

“Pinky loved to dance for our guests,” said Varga-Sinka. “Her keepers say that this is not a trained behavior, but a natural behavior she loved to show off. Flamingos are filter feeders, using their beaks to strain tasty morsels out of the water around them as they wade. To stir up the tastiest treats, flamingos will stamp their webbed feet. Pinky often performed this toe-tapping behavior out of the water for guests.”

Pinky also appeared on behalf of the park’s conservation and education efforts as an “ambassador animal.”

“She will be sorely missed,” said Varga-Sinka.