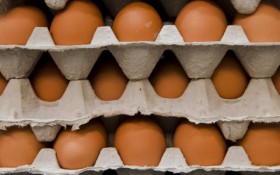 Police who went to great lengths to figure out who egged a Cleveland-area home more than 100 times over a year say they’ve finally cracked the case and charged a former neighbor.

Thirty-year-old Jason Kozan is charged with vandalizing the Euclid (YOO’-klid) home between May 2014 and June 2015.

Kozan had no attorney on record with Euclid Municipal Court. His bond was set at $2,000.

Detectives haven’t identified a motive for the eggings. Police say they largely stopped once Kozan moved away.

Albert Clemens Sr. has said the attacks damaged his home and kept his family on edge.

The lengthy investigation included undercover stakeouts, neighborhood canvassing and testing of eggshells at a crime lab.