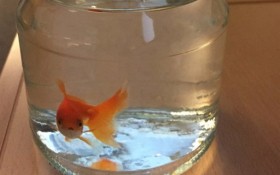 Norwegian police have bigger fish to fry so they’ve allowed a fellow officer to take home a goldfish that had been waiting for its rightful owner in a jam jar at the local police station.

Bodo Police spokesman Tommy Bech says investigators “were very close to solving” the case of the lost goldfish, found abandoned Saturday in a shopping bag at a soccer stadium in the northwestern town.

Officers had felt it their duty to look after the fish until the owner was found, Bech said Monday. He said the fish had been “well looked after.”

Bech said that Bodo police were now focusing on other issues and declined to give further details about the goldfish.