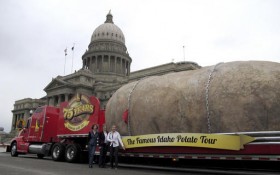 Kobe Bryant’s recent mention of the Great Big Idaho Potato Truck might have helped save the traveling advertisement from a premature retirement, according to the head of a state agency that promotes Idaho potatoes.

The recently retired Los Angeles Lakers guard remarked on the red truck while talking with an ESPN reporter during one of his final games, The Capital Press reported.

The truck hauls a 6-ton replica Russet Burbank. It’s on its fifth national tour to help charities and raise awareness of Idaho’s most famous vegetable.

Frank Muir, Idaho Potato Commission president and CEO, said ESPN sideline reporter Heather Cox told him that before a recent interview, Bryant referenced the running story line of the commission’s ads: an Idaho potato grower’s search for the “missing” potato truck. Cox is a spokeswoman for the commission.

“How long have you been working with Idaho potatoes?” Bryant asked Cox, nicknamed “Spud” by professional athletes. “Have they found that truck yet?”

The Idaho Potato Commission was considering retiring the potato truck after the current tour, which covers 25,000 miles, Muir said. But comments like Bryant’s demonstrate why it must stay on the road, he said.

Muir believes the commission is now leaning toward keeping the truck going as long as the public is eager to see it.

“The feedback we’re getting from growers is, ‘Why would you take it off the road?'” Muir said. “We continue to have more requests for (truck appearances) than we can fulfill.”

The commission budgeted $700,000 for the current tour.

Highlights include stops at the Kentucky Derby, a New England chili cook-off, SeaFair in Seattle, the premiere of “Idaho the Musical” in Las Vegas and a photo opportunity in which the truck will float on a barge through New York Harbor.