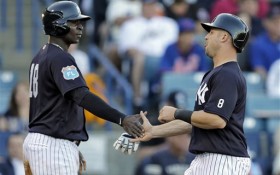 Alex Rodriguez says he plans to retire from baseball after the 2017 season.

The New York Yankees slugger revealed his intentions Wednesday during an interview with ESPN. His plans were confirmed by spokesman Ron Berkowitz.

Rodriguez, who returned last season from a one-year drug suspension, has 687 home runs, 75 shy of Barry Bonds’ career record. His 10-year contract with the Yankees runs through 2017.

Berkowitz says “at the end of the contract he’s going to be 42 years old, but we still have (324) games to go until we get to this point.”