Behind the scenes, a huge political shake-up is happening - The Horn News 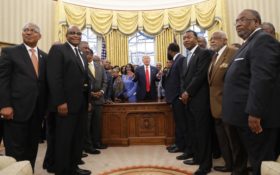 President Donald Trump invited African-American guests to his State of the Union speech, ran a Super Bowl ad on the criminal justice system he’s headed that makes the justice system more equitable for black people, and has portrayed himself as the champion of education and job opportunities for people of color.

During his administration, black unemployment has reached the lowest level in history.

Trump’s message has caught the eye of CNN political pundit Van Jones, who warned fellow Democrats that while they’re focused on impeachment efforts, Trump and the “new” Republican Party is resonating with African-American voters.

“You may not like it,” Jones said, as part of an evening panel. “What he was saying to African-Americans can be effective.”

“He mentioned HBCUs,” Jones added, referring to Historically Black Colleges and Universities. “Our black colleges have been struggling for a long time, a bunch of them have gone under. He threw a lifeline to them, in real life, in his budget.”

You can view the clip below:

"What he was saying to African Americans can be effective"

Jones, an outspoken liberal, is nervous about Trump’s ability to lure African-American voters away from the Democratic Party.

For all his worries, Jones may have a point. Behind-the-scenes, there may have been a titanic shift in voting demographics heading into the 2020 general election.

Very subtly, a shift seems to be taking place. A surprising number of African-American voters polled earlier this year say they’re in support of Trump. The change comes amid calls for a “Blexit,” coined by conservative activist and pundit Candace Owens.

The “Blexit” movement, short for black exodus, is intended to get African-American Democrats to question their loyalty to the left-leaning political party.

The result of a small shift in black support from Democrats to Republicans would be felt nationwide. Sen. Tim Scott, R-S.C., earlier this week said that if Trump were to garner at least 14 percent of the African-American vote, the 2020 election would be “game over.”

The message is resonating with some voters.

The notion that Trump is racist is a complete myth, said Osigah Kakaq, a 24-year-old black man from Charlotte, North Carolina.

“It’s a Republican stereotype the Democrats use over and over again,” Kakaq said. “It’s Trump’s turn now. Somebody has to earn your vote. No candidate or party can be entitled to your vote.”

With the 2020 race expected to be razor close, the Trump campaign knows that even slim gains among black voters and other groups would push Republicans across the finish line. While still the vast minority, the president does have scattered support among some black voters, like 67-year-old Jeanine Brown of Phoenix.

She found his speech “uplifting” and listed his economic accomplishments, prison reform and opposition to abortion as areas of significance to African-Americans. She’s a conservative Christian who previously voted for John McCain and Mitt Romney because of their record on abortion.

“It’s not about Trump. It’s about the policies,” she said. “I’m a Christian. I don’t think we should be killing babies. I don’t believe in same-sex marriage.”

Trump or no Trump, 19-year-old Bryan Lovejoy of Detroit says he’s not interested in voting in the presidential election come November. He believes Trump is on the “business side of people,” but that’s still not enough to get him to the polls.

“I’m not political,” he said. “I don’t really believe in all of the hype and the government.”

But still, there remain many African-American voters who aren’t buying the Trump campaign’s message.

The overtures mean nothing to voters like Jovan Brown, who loathes Trump’s record on race and sees the Republican president’s African-American guest list at the State of the Union as an attempt to use “black people as a prop.”

“I don’t know too many black people who care for Donald Trump,” said the 21-year-old Brown, who favors Democratic presidential candidate Bernie Sanders. “I’m sure he has black friends, but he’s not a supporter of our community.”

Trump reached out to black voters during his speech Tuesday, touting several initiatives ahead of the November election. His guests included one of the last surviving Tuskegee airmen and his great-grandson, who dreams of traveling to space someday, and a black veteran who struggled with drug addiction and eventually put his life back together with a new job. Trump announced a scholarship for a black fourth-grader from Philadelphia to highlight what he sees as failing public schools.

He trumpeted low black unemployment and poverty rates, his investments in historically black colleges and universities, and the impact of Opportunity Zones.

Critics suggest that the real audience for Trump’s appeals to African-Americans are white suburban women who may feel more comfortable voting for Trump if they see evidence that he’s not really as racist as Democratic rivals claim.

But the Trump campaign has long disputed that charge and is convinced that, if they can just reach black voters and share what Trump has done, including on the economy, at least some may be willing to give him a chance.

His campaign knows that even a small percentage shift in support among African-American voters could mean the difference between a narrow loss in the 2020 election — and a Trump landslide.

FURTHER ANALYSIS: How minority voters won it for Trump in 2016