Not Berned out! Sanders’ plan to beat Hillary - The Horn News 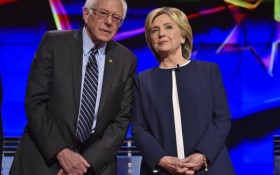 Last night Vermont Sen. Bernie Sanders proved his campaign isn’t over — not by a long shot.

And Sanders still appears to have a path to the Democratic nomination — or at least the ability to force a contested convention.

With Sanders latest win in West Virginia Tuesday night, he now has 1,430 of pledged delegates compared to Clinton’s 1,716.

Clinton’s campaign is crossing its fingers that Sanders’ supporters have given up faith and won’t go to the polls in the upcoming primaries, handing her the nomination.

But speaking in Atlantic City, NJ, on Monday, Sanders urged supporters to deny any discussion that his chance at winning the election is over.

“We have now won over 45 percent of the pledged delegates,” Sanders said. “If we can win here in New Jersey and win in California and win in some of the other states, and if we can win a majority of the pledged delegates, we’re going to go into Philadelphia and the Democratic convention and expect to come out with the Democratic nomination. So don’t let – don’t let anybody tell you this campaign is over. We’re gonna fight for the last vote we can find in New Jersey and California.”

June 7th is potentially a major turning point for the Sanders campaign, with California, Montana, New Jersey, New Mexico, North Dakota and South Dakota heading to the polls. Sanders has been busy campaigning in California, the nation’s  most delegate-rich state, with 475 pledged delegates up for grabs.

If Sanders can prevent Clinton from getting the remaining 667 pledged delegates that she needs to reach the magic number of 2,383 to clinch the nomination — a realistic possibility considering Clinton is required to now win 80 percent of the vote in the remaining states — the two will head to a contested convention, where the superdelegates will decide.

Clinton’s cushion of 523 superdelegates is substantial, but not a single one has yet voted. Considering they’re open to changing their vote up to the last minute, the party’s nomination will remain up for grabs at the convention.

That gives Sanders time to add to his miniscule total of 39 superdelegates and become the Democratic nominee.

Some political analysts say it’s reasonable to imagine superdelegates being swayed to “Feel the Bern” for the sake of the party. Numerous polls have illustrated Clinton’s weakness in the general election, and show Sanders has a far better chance than Clinton of beating the presumed Republican nominee Donald Trump in November.

Clinton’s inability to put away Sanders in the primaries isn’t just costing her good graces within the Democratic establishment. It is costing her gravely in the general election — and has the Trump campaign licking their chops.

“This is not Bill Clinton’s Democratic Party,” Republican pollster Kellyanne Conway said in a recent apperance on MSNBC’s “Hardball” with Chris Matthews. “That’s obvious. The centrist, moderate, southern governor, Democratic governor, who are those? Where are the Blue Dog Democrats?”

Matthews then asked Conway if she was happy about the Democratic primary situation.

“I’m thrilled because Hillary Clinton is trying to wage right now, quite unsuccessfully, a two-front war,” Conway replied. “Bernie’s to her left so she’s moving over there when she can. Donald Trump has vanquished 16 opponents, she can’t vanquish one. So I think he could pivot to a general election and take her on in the next 90 days.”

If that isn’t enough to convince superdelegates to support Bernie Sanders, a possible indictment of Clinton could have them rushing to back the Vermont Democrat.

In the coming weeks, Clinton is set to be interviewed by the FBI, signaling the months’ long investigation into her handling of classified emails is coming to an end — and an indictment may soon follow.

Former U.S. attorney Joe DiGenova told radio host Laura Ingraham that he believes a Clinton indictment is imminent, saying if she isn’t indicted, the Justice Department will never be able to charge another federal employee with similar crimes.

“The intelligence community will not stand for that. They will fight for indictment and they are already in the process of gearing themselves to basically revolt if [Attorney General Loretta Lynch] refuses to bring charges” he said.

If DiGenova is right and Clinton faces a criminal indictment, her entire campaign will be derailed and the Democratic Party could be forced to put someone else, most likely Sanders, on the ticket.

If one of her aids or advisers faces chargers, superdelegates will still be turned off from pledging their allegiance to a candidate encircled in scandal.

The Clinton campaign is increasingly desperate for voters to forget Sanders — but last night’s results in West Virginia prove they have not.

And it could ultimately cost Clinton the White House.

Aimee Pontier is an Editor for The Horn News