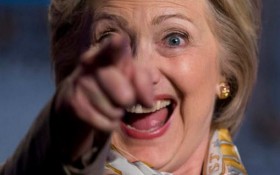 The political career of former Secretary of State Hillary Clinton has been dogged for years with accusations of misuse of power and rumors of corruption.

Now, new documents have shown that of the 80 companies that paid Clinton $21.6 million in speaking fees, many are receiving or have received a fortune in government contracts and favors. And some actively sought favors from Clinton and other State Department staff during her tenure as America’s top diplomat.

Critics say it was an unethical conflict of interest for the Democratic presidential candidate.

Should the $21 million in payments Clinton received by these groups be ultimately proven to be some sort of indirect kickback or “pay to play” arrangement, it could also be illegal.

It’s not just Wall Street banks. Most companies and groups that paid Clinton to speak between 2013 and 2015 have lobbied federal agencies in recent years, and more than one-third are companies that received large government contracts, a review by The Associated Press has found.

Their interests are sprawling and would follow Clinton to the White House should she win the election this fall.

The AP’s review of federal records, regulatory filings and correspondence showed that almost all the 82 corporations, trade associations and other groups that paid for or sponsored Clinton’s speeches have actively sought to sway the government — lobbying, bidding for contracts, commenting on federal policy and in some cases contacting State Department officials or Clinton herself during her tenure as secretary of state.

Presidents are not generally bound by many of the ethics and conflict-of-interest regulations that apply to non-elected executive branch officials, although they are subject to laws covering related conduct, such as bribery and illegal gratuities. Clinton’s 94 paid appearances over two years on the speech circuit leave her open to scrutiny over decisions she would make in the White House or influence that may affect the interests of her speech sponsors.

Rival presidential candidate Sen. Bernie Sanders and Republican critics have mocked Clinton over her closed-door talks to banks and investment firms, saying she is too closely aligned to Wall Street to curb its abuses. Sanders said in a speech in New York that Clinton earned an average of about $225,000 for each speech and goaded her for declining to release transcripts.

“If somebody gets paid $225,000 for a speech, it must be an unbelievably extraordinary speech,” Sanders said at an outdoor rally at Washington Square Park last week in advance of the New York primary. “I kind of think if that $225,000 speech was so extraordinary, she should release the transcripts and share it with all of us.”

Clinton has said she can be trusted to spurn her donors on critical issues. But her earnings of more than $21.6 million from such a wide range of interest groups will almost certainly affect public confidence in her proclaimed independence.

“The problem is whether all these interests who paid her to appear before them will expect to have special access when they have an issue before the government,” said Lawrence M. Noble, general counsel of the Campaign Legal Center, a Washington-based election watchdog group.

Clinton’s two-year speaking tour, which took place after she resigned as secretary of state, “puts her in the position of having to disavow that money is an influence on her while at the same time backing campaign reform based on the influence of money,” said Noble, a former general counsel at the Federal Election Commission.

The National Association of Realtors spent $38.5 million on government contacts in 2013, the same year it paid Clinton $225,000 to appear at the group’s gathering in San Francisco.

The Biotechnology Industry Organization, which represents biotech and pharmaceutical firms, spent between $7 million and $8.5 million annually on lobbying since 2008, including contacts with the State Department — during Clinton’s tenure — on the agency’s biotech discussions with foreign governments. The trade group, which hosted Clinton for $335,000 at its event in San Diego in June 2014, has won more than $425,000 in federal payments since 2008 in work for the National Science Foundation and other agencies.

The financial services and investment industry accounted for about $4.1 million of Clinton’s earnings. Its ranks included not only Wall Street powerhouses like Morgan Stanley, Goldman Sachs and Bank of America Corp., but also private equity and hedge funds like Kohlberg Kravis Roberts & Co. LP and Apollo Global Management LLC and foreign-owned banks such as Deutsche Bank AG and the Canada Imperial Bank of Commerce. Goldman Sachs, which gave Clinton $675,000 for three speeches in 2013, and Morgan Stanley, which paid her $225,000 for one speech the same year, both spent millions lobbying the U.S. during Clinton’s term at the State Department.

Nearly three dozen of Clinton’s benefactors spent more than $1 million annually on contacts with officials and Congress during the same year they paid her to appear at their corporate or association events, according to federal lobbying records. Many earned millions more in government contracts — indications of the regulatory and policy stances the groups might advocate during a Clinton presidency.

General Electric, which paid her $225,000 for a speech in Boca Raton, Florida, in January 2014, has the most extensive government portfolio. GE has spent between $15.1 million and $39.2 million annually on lobbying. The company has won nearly $50 million in government work since 2008, including $1.7 million from the State Department for lab equipment and data processing during Clinton’s tenure. The firm also lobbied the State Department all four years under Clinton on issues including trade and Iran sanctions.

As secretary of state, Clinton visited a GE aviation facility in Singapore and touted the State Department’s role aiding GE industrial and military deals abroad. Clinton met with GE Chairman Jeffrey Immelt once about the agency’s efforts to salvage a planned business exposition in Shanghai and also talked with him by phone, according to her calendars.

Clinton sought to defuse the issue of her Wall Street speeches during a February debate with Sanders by explaining that she “spoke to heart doctors, I spoke to the American Camping Association, I spoke to auto dealers, and, yes, I spoke to firms on Wall Street.”

Even the sponsors Clinton cited in her defense engaged in public advocacy — an indication of how many might seek favors if Clinton were elected.

The Cardiovascular Research Foundation, a fundraising group for cutting-edge heart medicine, paid Clinton $275,000 for a speech in Washington in September 2014. That same year, the organization joined other medical and health care groups in urging the Federal Drug Administration to reconsider its generic labeling rules.

The camping group also paid for lobbying in recent years, including $40,000 in 2015 on Transportation Department administrative actions, according to federal records. The group’s New York and New Jersey affiliate paid Clinton $260,000 for a March 2015 speech in Atlantic City.