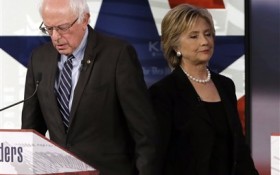 Hillary Clinton’s campaign on Sunday defended her donations from Wall Street by saying she worked to help the financial sector rebuild after the Sept. 11, 2001 attacks and sought to address the abuses that led to an economic crisis.

During the second Democratic debate on Saturday, Vermont Sen. Bernie Sanders put Clinton on the defensive when he said Wall Street had been the major contributor to her campaigns. “Now maybe they’re dumb and they don’t know what they’re going to get, but I don’t think so,” he said.

Clinton accused Sanders of trying to “impugn my integrity” and said that as a New York senator, she helped New York City’s financial hub rebuild. “That was good for New York and it was good for the economy and it was a way to rebuke the terrorists who had attacked our country,” she said, her voice rising.

Her debate response drew an incredulous reaction on social media sites like Twitter, and the debate’s moderators asked Clinton to respond to one Twitter user, who took issue with her mention of 9/11 to justify the contributions.

The exchange highlighted one of Sanders’ main critiques of Clinton: That she has maintained close ties to Wall Street executives during her political career and would be less forceful in policing the risky behavior of financial firms that Sanders says led to the economic downturn in 2008 and 2009.

When Clinton raised Wall Street donations along with 9/11, her Democratic rivals quickly pounced. In the post-debate “spin room,” former Maryland Gov. Martin O’Malley told reporters, “I’ll let her answer that gaffe. I think it was one of the biggest ones of the night.”

Republicans said Clinton had hidden shamefully behind the 9/11 attacks to deflect attention from her ties to her wealthiest donors. And they signaled that the response would likely find its way into advertising if Clinton becomes the Democratic nominee.

“It’s an intersection between stupid and offensive, and I think that’s going to be a big problem as the campaign heads into the general election,” said Sean Spicer, the Republican National Committee’s chief strategist.