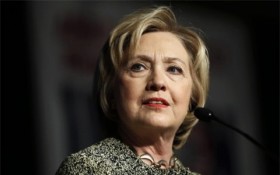 Hillary Clinton may have helped steer millions of dollars in government grants to a disgraced banker — and major Clinton Foundation donor — during her time as secretary of state.

And the FBI is reportedly already investigating the matter.

The millions in funds were given to Yunus’ Bangladesh-based Grameen Bank through 18 different U.S. Agency for International Development (USAID) grants.

Yunus is a personal friend of the Clintons who donated $300,000 to their foundation during that time — and he’s also faced a mountain of corruption charges that possibly should have precluded him from getting government grants.

Now the FBI is quietly looking into how Yunnis got the funds, the Daily Caller reported.

According to the Daily Caller, “Secretary Clinton’s mixing of official work with foundation donors is reportedly the focus of a second, less publicized FBI public corruption investigation of the former secretary of state. The more widely known FBI probe focuses on her use of a private email server located in her New York residence to conduct official government business.”

Yunus’ idea of giving out small “microloans” while the head of Grameen Bank was praised by many — including the Clinton’s, who in 2006 had strongly backed the campaign that helped Yunus win a Nobel Prize.

But he was removed as Grameen’s managing director after a defamation trial and allegations of unauthorized bank transfers. It was a humiliating blow for the Clinton pal, and led to Hillary Clinton to publicly intervene on his behalf with then-Bangladesh Foreign Minister Dipu Moni.

Controversy swirled around Yunus after a Norwegian television documentary that screened in December of 2010 accused him of transferring Norwegian development funds from Grameen Bank to another venture without prior approval in 1996.