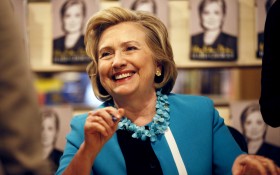 Former State Department employee Brian Pagliano, who helped Hillary Clinton set up her private email server, is pleading the Fifth after being subpoenaed to appear at a Benghazi hearing that would include questions on Clinton emails. That means that, if Pagliano has something to hide, he can’t be made to testify against himself.

Attorneys for Pagliano sent the committee a letter Monday saying their client would not testify at a hearing planned for next week. The panel had subpoenaed Pagliano last month.

The congressional committee was launched to investigate the Obama administration’s response to the 2012 attack on U.S. diplomatic facilities in Benghazi, Libya. That probe has widened to include Clinton’s use of a private email server when she was secretary of state.

Recent emails released by the State Department have shown Clinton and her aides at the State Department were acutely aware of — and occasionally frustrated by — the need to protect sensitive information when discussing international affairs over email and other correspondence.

One example came in a February 2010 message, when an aide noted a draft of innocuous remarks about the Israeli-Palestinian conflict was on the State Department’s classified messaging system. Clinton replied: “Just email it.”

In an exchange from Feb. 6, 2010, Clinton asks aide Huma Abedin for talking points for a call she’s about to have with the newly appointed foreign minister of Ecuador. “You are congratulating him on becoming foreign minister, and purpose is to establish a personal relationship with him,” Abedin replied. “Trying to get u call sheet, its classified….”

These messages were among roughly 7,121 pages of emails the State Department released Monday as part of a monthly court-ordered release, including 125 emails censored before their release because they contain information now deemed classified.