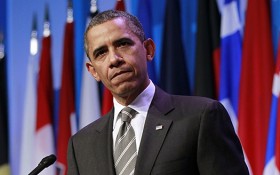 President Barack Obama, whose religious leanings and Christian credentials have long been matters of speculation, claims to be a big fan of outspoken Catholic Pope Francis.

But according to numerous reports, the Obama Administration is hatching a plan to score points with its liberal base by insulting and embarrassing Francis when he visits the White House September 23.

The reported guest list will include a pro-abortion nun, a gay Episcopal bishop, a transvestite male, and the former chair of the Transgender Caucus of Dignity USA.

Aaron Ledesma, a gay Catholic, said he considered it a “miracle” that he was invited to the event. But it’s looking more like politics than divine intervention.

While Francis is seen as a more liberal-leaning and accepting pontiff than some of his predecessors, American Catholics see Obama’s move as a brazen attempt to ruffle the pope’s feathers.

The gesture is “beyond the bozo Soviet nonsense that Pope John Paul II had to put up with,” according to an op-ed produced by Catholic Vote, a group that seeks to mobilize politically active Catholics.

Obama’s relationship with the Catholic Church has a shaky past, and there are several areas of deep disagreement.

The pope’s U.S. visit is focused on family issues, and while Francis has emphasized compassion and tolerance for gays and lesbians, he’s also affirmed the church’s opposition to same-sex marriages – putting him at odds with Obama.

In the past, the U.S. Conference of Catholic Bishops opposed legislation over provisions on coverage for abortions and birth control. Hundreds of Catholic groups and employers sued the Obama administration over the law, claiming it infringes on religious freedom.

The pope’s brief visit to the White House is part of his highly anticipated trip to the U.S. and Cuba.