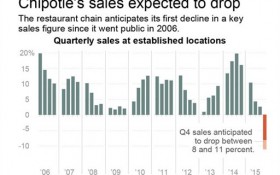 Chipotle shares continued falling Monday as the company faces its first decline in a key sales figure after an outbreak of E. coli linked to its restaurants.

The chain known for touting its quality ingredients said Friday it expects sales to drop between 8 percent and 11 percent at established locations for the fourth quarter if current trends continue. That would mark the first time the figure fell since Chipotle went public in 2006.

In a filing with the Securities and Exchange Commission, Chipotle said sales have been “extremely volatile” since it closed restaurants in Oregon and Washington in early November as a result of the outbreak. Sales plummeted by as much as 22 percent as additional cases were reported, and were down 16 percent for November.

The Centers for Disease Control and Prevention had said earlier Friday that the outbreak had widened and sickened 52 people in nine states. It has not yet identified the ingredient that made people sick.

The first cases were reported at the end of October, and the agency said the most recent illness started on Nov. 13

About 48 million people get sick from a foodborne illness each year, according to the CDC.

It was not immediately known if the illnesses were part of a national outbreak of E. coli that has been linked to the Denver-based chain.

Boston College said several students came to the school’s Health Services center and the “common factor” among all 30 students was that they had eaten at the Chipotle restaurant in the Cleveland Circle neighborhood near the BC campus.

The school said it notified the Massachusetts Department of Public Health, which is investigating.

“We cannot confirm a cause of the illness at this time, but we are coordinating with Boston public health officials to determine the cause,” said Scott Zoback, a spokesman for the public health agency.

Chris Arnold, a spokesman for Chipotle Mexican Grill Inc., said in an email that the Boston restaurant has been closed temporarily while the company works with local health officials to investigate the illnesses.

The company has no evidence to suggest that the incident is related to previous cases, Arnold said, noting that there have been no confirmed cases of E. coli connected to Chipotle in Massachusetts.

Head Coach Jim Christian said he got a call from two players Sunday morning saying they had food poisoning. One was Dennis Clifford, the team’s leading rebounder, who did not play in the Eagles’ 68-66 loss Sunday to UMass-Lowell.

The U.S. Centers for Disease Control and Prevention says the outbreak has sickened 52 people in nine states so far, but the ingredient that made people sick has not been identified.

Chipotle, which has more than 1,900 locations, has said it is adopting stricter food safety standards.

Chipotle Mexican Grill Inc., based in Denver, says whatever the likely ingredient was that made people sick is out of its restaurants and that it is adopting stricter food safety standards.

The company, which has benefited from marketing its use of local ingredients, said some of its local produce suppliers might not be able to meet the new standards. Locally sourced produce accounts for a “relatively small percentage” of the produce the chain uses, said Chris Arnold, a Chipotle spokesman.

Jeffrey Bernstein, a Barclays analyst, noted that fast-food chains have recovered from similar foodborne illnesses in the past. But he said Chipotle’s recovery will likely take longer given greater social media awareness.

Bernstein also noted that Chipotle is known for its “Food with Integrity” slogan, which makes the E. coli cases “all the more damaging.”