Chinese warships gather off the coast of Alaska - The Horn News 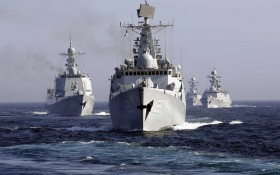 Five Chinese warships have moved into the Bering Sea off the coast of Alaska as President Barack Obama continues his travel throughout the state.  It’s the first time the Chinese have made such a move and Pentagon officials are keeping a close eye on the situation

The Chinese vessels moved to their new position after participating in a naval exercise with Russia.

The U.S. military has been aware of ships and has been tracking their movements for days as they moved through international waters. Earnest said the intent of the ships presence “is still unclear.” He was speaking aboard Air Force One as Obama flew near the Bering Sea.

Obama was in Alaska to speak about climate change.

Navy Cdr. Bill Urban, a Pentagon spokesman, said this is the first time that the U.S. has seen ships from the People’s Liberation Army Navy in the Bering Sea.

“We respect the freedom of all nations to operate military vessels in international waters in accordance with international law,” Urban said.

There are three surface warfare ships, one amphibious assault ship and one supply vessel.

White House spokesman Josh Earnest said the Defense Department “positively identified a number of Chinese naval vessels in that region, but based on their analysis they have not detected any sort of threat or threatening activities.”

Associated Press contributed to this report.