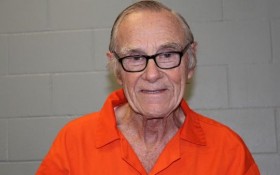 A former children’s television show host who vanished decades ago amid allegations he sexually abused children on a camping trip in Louisiana is due to be arraigned Monday on rape charges.

Almost 40 years after he was accused of obscene behavior with young boys, 76-year-old Frank John Selas III on Thursday was brought to the Rapides Parish Detention Center, according to the Daily Town Talk. Selas’ lawyer says his client is innocent of the charges.

Selas was transferred to central Louisiana from a San Diego County jail in California. He was arrested on Jan. 25 at his home in Bonita, California.

In February, he was indicted by a Rapides grand jury on two counts of aggravated rape, three counts of sexual battery and eight counts of indecent behavior with a juvenile.

The Rapides Parish Sheriff’s Office says Selas is being kept in isolation.

In the late 1970s, Selas hosted the “Mr. Wonder” show on KNOE-TV in northern Louisiana. He allegedly fled to Brazil in 1979 after parents complained to authorities that he abused their children on a camping trip to Kisatchie National Forest in central Louisiana.

The sheriff’s office has said investigators identified seven alleged victims in Louisiana as a result of the 1979 investigation, which led to an arrest warrant but not an indictment.

Marc Carlos, a California-based attorney representing Selas, said his client would enter a not guilty plea on Monday. He spoke to The Associated Press in a telephone interview Saturday.

“There are a lot of aspects which the public isn’t aware of in this case; there is a lot of speculation and innuendo that we are eager to put an end to,” he said.

Carlos said the defense team has not seen the evidence against Selas. He said interrogation techniques used in 1979 may have tainted the case against his client.

“We don’t know if these interviews were taped, what kinds of questions were asked, what kind of conduct was suggested to the child,” Carlos said. “There is probably a woeful lack of forensic evidence.”