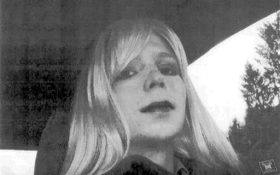 Attorneys for the transgender soldier imprisoned in Kansas for sending classified information to the anti-secrecy website WikiLeaks said Monday her hospitalization last week was due to an attempted suicide.

Chelsea Manning’s attorneys, in an email to media outlets, did not disclose details about the attempt early July 5 at the military prison at Fort Leavenworth, where the 28-year-old Manning is serving a 35-year sentence.

But the attorneys, who said they spoke to Manning by telephone Monday for the first time since the attempt, accused the U.S. Army of a “gross breach of confidentiality” for publicly revealing last week that Manning had been hospitalized. The Army at that time didn’t offer details.

Manning’s lawyers added that the soldier “knows that people have questions about how she is doing” and will remain under close observation at the lockup for several weeks.

“She would have preferred to keep her private medical information private, and instead focus on her recovery,” said her attorneys, who appeared unaware of Manning’s hospitalization until reached by reporters the next day and who criticized leaks of the information to media outlets.

“The government’s gross breach of confidentiality in disclosing her personal health information to the media has created the very real concern that they may continue their unauthorized release of information about her publicly without warning,” they said.

Messages left Monday with an Army spokesman, Wayne Hall, were not immediately returned.

“For us, hearing Chelsea’s voice after learning that she had attempted to take her life last week was incredibly emotional,” her attorneys’ statement read. “She is someone who has fought so hard for so many issues we care about and we are honored to fight for her freedom and medical care.”

Manning, arrested as Bradley Manning, was convicted in 2013 in military court of six Espionage Act violations and 14 other offenses for leaking more than 700,000 secret military and State Department documents, plus some battlefield video. Manning, who was an intelligence analyst in Iraq at the time, later filed a transgender prisoner rights lawsuit.

Manning has appealed the criminal case, arguing that her sentence was “grossly unfair” and that her actions were those of a naive, troubled soldier who aimed to reveal the toll of the wars in Iraq and Afghanistan. The appeal contends Manning’s disclosures harmed no one, but prosecutors have said the leaked material damaged U.S. security and identified informants who helped U.S. forces.