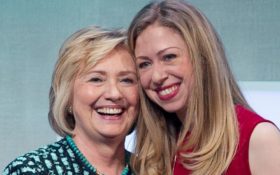 Democratic Party insider Chelsea Clinton has lived a life of luxury of privilege that would be the envy of almost every single person in human history.

But she wants the world to know it’s not good enough — now she says she’s leading the charge to “erode” the “white privilege” holding back so many Americans.

Critics say it’s a huge mistake that just shows how disconnected she is from the average voter.

Speaking to far-left Rep. Ayanna Pressley, D-Mass., at a virtual fundraiser for Democratic presidential candidate Joe Biden, Chelsea made sure to point out how she was raising her kids — and until everyone follows her lead, Chelsea says she doesn’t believe elections can be fair.

“You know, Congresswoman, certainly… my children are young,” Chelsea says in the video. “But we believe they’re young but still citizen, so we talk about—have talked about – the ratification of the 19th Amendment and ‘Women’s Equality Day’ but how fundamentally incomplete that victory was.”

She called the effort behind women’s suffrage a “fundamentally flawed” effort because it wasn’t as racially sensitive or inclusive as the Democratic Party believes in today.

“These fights are not just inactive things in our history books,” she said. “These are still active, ongoing fights. 40 percent of Americans with disabilities report that they have real challenges voting in person.”

Chelsea went on to say that elections across America are rigged against Democrats where there wasn’t universal mail-in balloting, and so she wanted to teach her children to “erode” their “white privilege” to make sure there’s equality in America.

“So, in states where there hasn’t been no excuse absentee voting or there hasn’t been the introduction of early voting – it still isn’t easy, fair, or equal for many Americans to vote,” she claimed, without evidence.

“I think it’s really important for my children to understand that, and I think it particularly important they understand that white children of privilege,” Chelsea concluded. “Because I want them to erode that privilege throughout their lives to ensure more people are enfranchised and that equality isn’t just an ideal. “

It is important to note that over half the Democrats in the Senate at the time either voted against or abstained from voting for the 19th Amendment.

It enjoyed overwhelming support among Republican voters, who also fought for its expansion to ensure that black women voters in the South weren’t enfranchised just in name.

Chelsea Clinton is worth an estimated $25 million – something critics on social media were quick to point out.

Before you lecture us on white privilege @ChelseaClinton why don’t you give up yours? 1. Stop flying by private jet 2. No domestic staff 3. Stop living in multiple homes 4. Give up the fruits of nepotism 5. Give back what your family stole from the starving people of Haiti

Sad she takes after her mom and dad.

Really? Then give every dime back that you made bc of who you are! @ChelseaClinton is one of the biggest hypocrites ever.