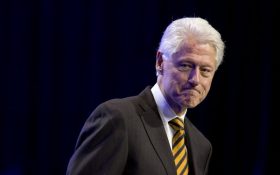 In a recent interview, Bill Clinton was pressed about disgraced former Minn. Sen. Al Franken’s sexual misconduct allegations — and the former president’s statement caused his alleged rape victim to write a virtual comeback that supporters say was a social media slap in the face.

“I think the norms have changed in terms of what you can do to somebody against their will,” Bill told PBS NewsHour’s Judy Woodruff.

Norms have changed? A former associate of the Clintons, Juanita Broaddrick, has claimed for over twenty years that Bill violently raped and beat her inside a hotel room.

If he thought that used to be normal, Bill is very gravely mistaken. It was never okay to rape women.

When Broaddrick heard that the former president was giving excuses about forcing women against their will, she shared a biting criticism — and what she said quickly went viral.

Alex Burns of The New York Times tweeted the following —

And this is quite the turn of phrase pic.twitter.com/JZjl4t9WKs

“Quite the turn of phrase” is the understatement of the year.

Broaddrick herself weighed in, slamming her accused rapist. What she said got over 4,000 ‘likes’ and thousands of shares on social media —

Sooooo….Bill Clinton thinks he should get a pass because it was 1978 when HE RAPED ME….and HE knows it’s not acceptable in today’s society??? https://t.co/4VZlcobeIW

Of course, liberals rushed to defend Bill Clinton against the accusations.

Social media users rallied to bash the reports on Broaddrick’s story, asking questions like, “What does it matter that Bill violently raped a women?”, “Who cares that he ruined someone’s life?”,  “It doesn’t matter.”, “Isn’t that rape in the past?” And, of course, “What about Donald Trump?”

You can see some of the nasty examples here —

WE DON'T CARE ABOUT A 20 YEAR OLD SCANDAL. WHAT' THE POINT. WHO DOES IT HELP??? JUST STOP MAGGIE. IT'S DEFLECTION AND IT'S NOT WORKING.

Why are you talking about Bill Clinton? Is he destroying democracy like the dotard? Focus, please. This tangent makes you look bad.

Focus on Trump, nothing else matters..

It’s proof how hypocritical the left is. Democratic leaders claim to be pro-woman — until a brave woman comes forward and accuses them of violent rape.

That’s when they say things like, “At this point, what difference does it make?”

To Ms. Broaddrick, one must imagine it makes a huge difference.