Changing History! House thought to be President Monroe’s is wrong - The Horn News 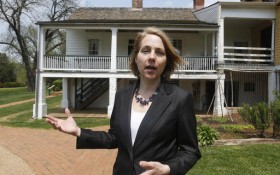 For decades, a modest farmhouse in central Virginia was thought to be what remained of President James Monroe’s home in Charlottesville, Virginia. It turns out, historians were wrong.

New evidence suggests the building that has long been billed as the home that the Founding Father lived in beginning in 1799 was actually a guest house Monroe built about two decades later. It’s now believed the entirety of Monroe’s real home was lost in a fire years after he sold the property.

“It was just sort of a historical mix-up, and we’re delighted that science is what saves the day here,” said Sara Bon-Harper, executive director of James Monroe’s Highland, which is owned and operated by the College of William & Mary.

As far back as 1885, newspaper accounts suggested the home at Highland was a wing of Monroe’s original residence that survived a fire in the mid-1800s, Bon-Harper said. The idea was accepted by scholars and passed down for generations.

But something didn’t quite add up. The home includes details that became popular years after Monroe supposedly built it. So researchers recently got to work to see if they could confirm their suspicions.

Dendrochronlogy — a method of dating trees — was performed on pieces of the home and the wood was found to have been cut around 1818, Bon-Harper said. That matched with a letter Monroe sent to his son-in-law around that time that mentioned a small home he built for visitors to Highland.

At the same time, archeologists were searching for what they believed was the missing wing of Monroe’s main house.

What they found in front of the large addition built by a later owner were the remains of a large, free-standing house that appeared to have been destroyed in a fire, said Dr. Benjamin Ford of Rivanna Archaeological Services LLC, which was hired by Highland to perform the archaeology.

With the new evidence showing the standing home was actually built in the 19th century, researchers concluded that the remains are likely what’s left of the actual home Monroe lived in from 1799 until he sold the property in 1826.

Historians hope the discovery will help people better understand the fifth president and former Virginia governor. The small, simple building that was thought to be his residence didn’t seem to fit a man of his importance, especially next to the grand Monticello estate of his good friend and neighbor, Thomas Jefferson.

“It’s going to turn everything on its head in a very good way,” said Susan Kern, an early American cultural historian at William & Mary.

Starting Thursday, which is Monroe’s birthday, tours at Highland will change to reflect this new understanding of Monroe’s property. Excavations of the remains of Monroe’s original house are ongoing. Eventually, Highland hopes to create a virtual representation of Monroe’s home that visitors can explore.

Bon-Harper says she understands that people who’ve visited Highland for decades under the impression they were walking through Monroe’s home may feel a bit cheated. But she said she hopes the public will be excited about the potential to learn something new.

“I hope that they come back and learn a new story and accept, as I do, that in science sometimes we have to revise what we think because we learn more,” she said.