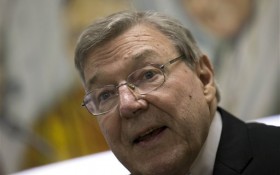 One of Pope Francis’ top advisers acknowledged he had heard that an Australian Catholic school teacher who serially abused students might be involved in “pedophilia activity” in the 1970s, but said he had no idea how rampant clergy abuse was at the time, during an extraordinary public hearing of an Australian investigative commission just a few blocks from the Vatican.

Australian Cardinal George Pell, who testified via videolink from Rome to the Royal Commission in Sydney from Sunday night to early Monday morning, also conceded that the Catholic Church “has made enormous mistakes” in allowing thousands of children to be raped and molested by priests.

Two dozen Australian abuse survivors and their companions traveled across the globe to witness Pell’s testimony in a Rome hotel’s conference room, a significant show of accountability in the church’s long-running abuse saga.

And in a case of art imitating life, the testimony played out just hours before “Spotlight,” about the Boston Globe’s investigation into decades of priestly rape of children and systematic cover-up by the Catholic Church, won Best Picture at the Academy Awards.

“I’m not here to defend the indefensible,” Pell said as the hearing began. “The church has made enormous mistakes and is working to remedy those.” He said the church had “mucked things up and let people down” and for too long had dismissed credible abuse allegations “in absolutely scandalous circumstances.”

The lead counsel assisting the commission, Gail Furness, questioned Pell about current Vatican efforts to address the crisis, as well as Pell’s past in Australia, where he is accused of ignoring warnings when he was an assistant priest about Christian Brother Edward Dowlan, a teacher at St. Patrick’s College in the Australian city of Ballarat. The deeply Catholic city has been devastated by disclosures about the huge number of abuse victims there, scores of whom killed themselves.

Pell, now Pope Francis’ top financial adviser, has repeatedly denied allegations that he ignored warnings decades ago that Dowlan was abusing students. Under questioning from Furness, Pell said he had heard “one or two fleeting references” to “misbehavior” by Dowlan in the 1970s “which I concluded might have been pedophilia activity.”

But Pell said he had not known victims’ names, that there were large numbers of victims or that Dowlan’s offending was general knowledge at the school.

Dowlan was sentenced to six years in prison last year for abusing 20 boys.

Pell also testified that he had been aware of a Christian Brother named Leo Fitzgerald who swam naked with students and said he had been told by parishioners that Fitzgerald also had a habit of kissing boys. But Pell said he had not believed the kissing to be sexual.

“It was certainly unusual, but … nobody said we’ve got to do something about this,” Pell said.

Pell’s acknowledgement that he knew about such behavior is the closest he has publicly come to stating that he had even tangential awareness of the scandal playing out in Ballarat, where at the time he was in no position of church authority. His concession came as Furness presented evidence that many people around Pell knew about the abuse.

“The sexual offending by Christian Brothers at St. Alipius school and St. Pat’s school was known by a significant number in the community – would you agree with that?” Furness asked Pell.

“I would agree that it was known to all the people whom you’ve mentioned, and they do constitute a significant number,” Pell replied.

The commission is investigating how Pell dealt with abuse allegations as a priest, educator and adviser to former Ballarat Bishop Ronald Mulkearns, as well as how the Melbourne archdiocese responded to allegations of abuse, including when Pell served as a Melbourne auxiliary bishop.

Pell was a consultant to Mulkearns, who moved Australia’s most notorious pedophile priest, Gerald Ridsdale, between parishes for years. Pell denies he was involved in transferring Ridsdale.

Pell dubbed Mulkearns’ handling of Ridsdale a “catastrophe for the church.” He said he was a prime candidate for the Vatican’s proposed tribunal for negligent bishops, although there is no indication the elderly Mulkearns would stand trial by the time the tribunal is operational.

But Pell also acknowledged that he too had made mistakes in often believing the priests over victims who alleged abuse.

“I must say in those days, if a priest denied such activity, I was very strongly inclined to accept the denial,” Pell said.

This is the third time that Pell has testified before the commission, but the current round has generated intense international attention because it is taking place near the Vatican. The commission allowed Pell to testify from Rome because he was too ill to travel home.

Pell entered the hotel by a side door and still hadn’t left more than an hour after the testimony ended at 2 a.m. Some Australian media covering the hearing reported that security agents pushed them back as Pell’s Vatican car arrived.

David Ridsdale, who was abused by his uncle, Gerald Ridsdale, said he was grateful that the horrors of Ballarat were finally getting global attention. Gerald Ridsdale is in prison after being convicted of multiple counts of abuse.

“We’re here to seek the truth. We’re here to heal our city,” David Ridsdale said. “We have the highest suicide rate among men in Australia. We have some of the worst drinking and violence problems. And it all stems from that abuse.”

In a statement Sunday, Pell repeated his support for the commission’s work, vowed to meet individually with victims who had traveled to Rome and said he hoped the coming days “will eventually lead to healing for everyone.”

Anthony Foster, whose eldest daughter was repeatedly raped by priest Kevin O’Donnell and committed suicide, said it was “astounding and empowering for victims” that the commission was now sitting in judgment of Pell on a global stage.

The commission has no power to file criminal charges. But commissioners can note in their report whether they believe someone has broken the law and refer the matter to police and prosecutors.