Carson loses another top adviser. Is his campaign sunk? - The Horn News 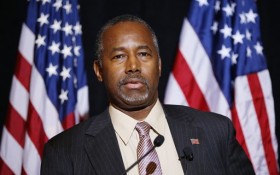 The long campaign road hasn’t been kind to former Tea Party sweetheart Dr. Ben Carson. The Republican presidential candidate lost another top adviser Thursday as his campaign continues to show signs of splintering in the weeks leading up to early voting in Iowa and New Hampshire.

Parker was not immediately available for comment Thursday when contacted by The Associated Press.

An Alabama-based entrepreneur, Parker helped Carson raise tens of millions of dollars, but he also presided over an operation known for exuberant spending, particularly for hiring consultants and in fundraising. Politico recently reported that Parker himself earned $20,000 per month.

Carson did not highlight any problems with Parker in a press statement Thursday, instead, praising him as a “valued” aide and “trusted friend.” No replacement for Parker was named.

“Our significant fundraising success has been due, in large part, to Dean’s dedication and commitment to ‘We the People,'” Carson said.

Still, Carson was implicitly critical of some of his campaign’s financial operations during a December interview with The AP, when he stated that his entire organization — including top personnel — was up for review.

“I recognize that nothing is perfect,” Carson said at the time. “And, yes, we’ve had enormous fundraising, but that requires that you be efficient in the way you utilize the funds. And, yes, we are looking at all those things.”

A week later, Bennett and Watts had resigned, with Bennett questioning Carson’s readiness for office and saying that running the campaign had been impossible because Carson leaned more on outside advisers — particularly his longtime business manager Armstrong Williams — than on the political professionals he’d hired.

Parker served the campaign as both a friend and adviser to Carson. He often traveled with Carson, sometimes introducing the candidate at campaign rallies by describing his introduction to Carson several years ago and how they developed a close friendship. The two men’s wives sang together in a group called the “Carson Singers,” a quartet that performed patriotic numbers before Carson spoke.