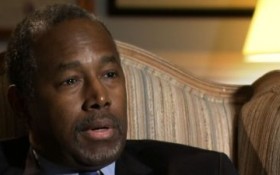 A volunteer for Ben Carson’s presidential campaign died Tuesday after being hospitalized with injuries suffered in a car accident in western Iowa that hurt three other campaign workers.

Carson was in South Carolina at the time of the Tuesday morning accident and suspended his campaign events.

Campaign spokesman Jason Osborne said the crash occurred when a van carrying three Carson volunteers and a paid staffer flipped onto its side on an icy road and was hit by another vehicle. The others in the van were treated at a hospital in Atlantic, Iowa.

Carson posted a picture of himself and Joplin on Twitter Tuesday night, writing: “Rest In Peace Braden Joplin. Our thoughts and prayers are with his family.”

In a statement released by his campaign, Carson wrote: “One of the precious few joys of campaigning is the privilege of meeting bright young men and women who are so enthusiastic about their country that they will freely give of their time and energy to work on its behalf. America lost one of those bright young men today.”

Chris Cook, spokesman for Texas Tech University, said the death of Braden Joplin, who attended the university in Lubbock, was a great loss.

“The loss of life, especially one of our own, is always tragic. Our thoughts and prayers are with the family and friends of Braden during this difficult time.”

Other presidential candidates from both parties, including Republican Jeb Bush, Marco Rubio and Ted Cruz and Democrat Martin O’Malley, also offered condolences on Twitter. And Democratic contender Bernie Sanders paid tribute at the beginning of a rally in Iowa City, Iowa.

“I have a lot of respect for any young person who gets involved in the political process,” Sanders said. “Our hearts go out to the family of the young man.”