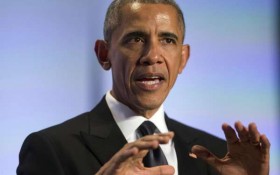 What does the White House have to hide about President Barack Obama’s Iranian nuclear deal?

The Obama administration is refusing to allow a senior aide to testify before a House committee about his role in the deal, and controversial statements he made about duping the public.

Ben Rhodes, a deputy national security adviser at the White House, caused a firestorm of controversy last week when he bragged to The New York Times Magazine about his role in silencing criticism of the controversial Iranian nuclear plan.

Monday, White House counsel Neil Eggleston said in a letter to the House oversight committee that allowing Rhodes to testify would threaten the president’s “ability to receive candid advice.”

Committee Chairman Jason Chaffetz says Rhodes should have to explain and clarify his remarks.

Eggleston responded that presidents of both parties have invoked executive privilege and declined to allow aides to testify.

Obama went on the attack last Thursday over Rhodes, when White House spokesman Josh Earnest tried to brush off the request from Chairman Jason Chaffetz by casting the Utah Republican’s hearing as political theater and challenging the GOP case against the agreement.

“I think there are some people who have some explaining to do when it comes to the wildly false accusations that they made about the Iran deal. And it’s not the administration. It’s Republicans who are demonstrably wrong when it comes to the Iran deal,” Earnest said, accusing several Republican lawmakers, including Sen. Tom Cotton, R-Ark., of being “wildly misinformed, mistaken or lying” when they made claims about the deal’s economic benefits for Tehran.

Rhodes, a speechwriter and top foreign policy adviser, previously said he created an “echo chamber” of supportive experts in an effort to persuade lawmakers to vote in favor of the legacy-burnishing deal in which Iran promised to curb its nuclear program in return for billions in sanctions relief, and also claimed Obama misrepresented the timeline of the negotiations in an effort to create a story line that bolstered their case.